Special Adviser to President Buhari on Political Matters, Babafemi Ojudu, says the PDP is so thirsty for power that the party members can assassinate Vice President Yemi Osinbajo,  just to achieve their evil purpose.

Ojudu made said this in a statement he released on his Facebook page this morning. He also accused the opposition party of giving money to Pastors so they can propogate the fake news of President Buhari’s plans to Islamize Nigeria. Read what he wrote below

PDP and Atiku are desperate. Their desperation is however going too far and they are capable of doing anything now .They are resorting to all manners of puerile strategy to win, to get the South West in particular . In conjunction with their foreign allies and consultants and a band of ethnic bigots they are even circulating a fake news that Osinbajo has resigned. It was the same set of people who blamed God for not killing him when his helicopter crashed. They were agog with all manners of inhuman and ungodly postings on social media after the unfortunate incidents. We know them they are king and queens of FAKE NEWS.

PDP and it’s agents have become so irresponsible. They can do anything now, even assassinate Osinbajo to achieve their purpose. But God forbid! They know Yoruba states will be key decider in this election. They are doing everything possible in the South West to cause confusion. They are sending money to pastors ( quote me on this )to tell their congregation that Buhari want to Islamize Nigeria and some pretenders in cassock are doing their biddings. When your pastor or Bishop preaches that Buhari want to Islamize Nigeria ask him or her how much he or she has collected from Atiku and PDP? How I wish the pastors know the source of the money they are collecting from Atiku? We are up to them as we shall continue to expose them. 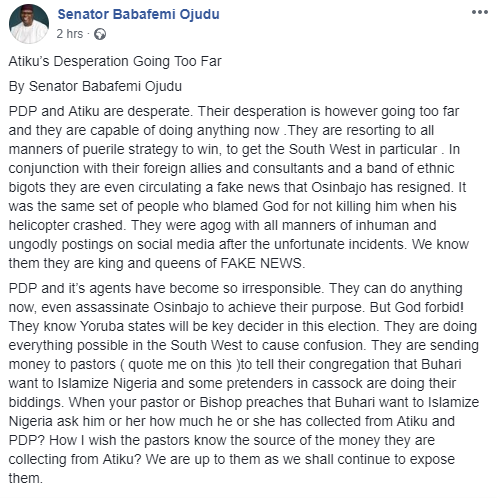