Assistant Commissioner of Police, Yomi Shogunle blocks Ruggedman on Twitter for asking his opinion on SARS and Kolade Johnson’s death

The death of young Nigerian, Kolade Johnson who was reportedly murdered by a SARS operative while watching football has once again sparked the #EndSARS conversation on social media.

Against this backdrop, Nigerian rapper, Ruggedman tweeted at Yomi Shogunle, an assistant commissioner of Police saying, “I am waiting for your tweet on the death of yet another innocent citizen at the hands of SARS officers”.

The rapper was however blocked by the police officer. 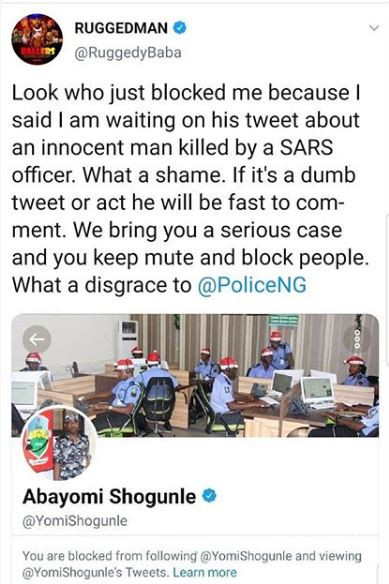 Nigeria ranked sixth most miserable country in the world – Forbes

Over 50 bandits neutralized by combined ground and...