Singer Ikechukwu has warned of what will happen if SARS officials ever try to harass him the way they harass other Nigerian citizens.

Ikechukwu Onunaku shared a heartbreaking video of SARS officials harassing and beating a man because he refused to let them search his phone (read here). He then condemned the officers for terrorizing citizens, rather than protect and serve them.

He added that the day a SARS officer tries to attack him, he might end up dying because he will “disarm that fool and shoot him with his own gun.”

When i say this i really mean it, the day these type of individuals run into me i might end up dying that day.

Truth is how much humility and calm are u supposed to have? Even if we want to believe that God is using the situation to test us , will he test us to our death and demise?

For what reason is such an individual wearing the uniform of one who is supposed to protect and serve the same person he is bludgeoning and raping of his rights in broad daylight so bold and so arrogant with slaps to follow and insults. Then more planking .

My God i beg u please cos i will disarm that fool and shoot him with his own gun. I swear on it. If u powers that be cant do what is necessary then step the fuck outta office and outta the way and allow people who are about change and fairness and rules and regulations and proper protocols and due process take ur place.

For u are the tumbleweed and the winds are high , the storm that in brewing is nigh, overspill is inevitable, and the drops i feel upon my umbrella. This rain shall pour and it will be torrential. Nuffsaid #ENDSARS 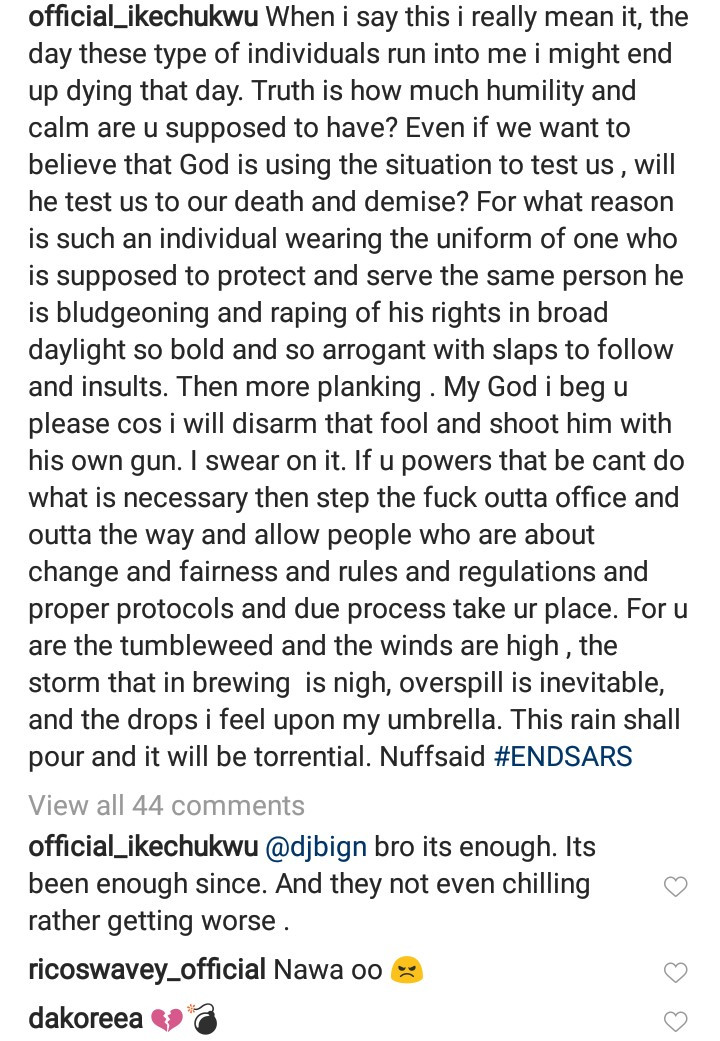 Mofe Duncan releases statement, confirms his marriage to Jessica is over

A marriage built on only love will never last- Lagos pastor, Tony Rapu