JOHANNESBURG (AP) — Perhaps nowhere in today’s South Africa is the country’s inequality on more dramatic display than in the neighboring Johannesburg suburbs of Sandton and Alexandra.

With its gleaming high-rises and lush estates, Sandton is known as Africa’s richest square mile. Alexandra, a onetime home to Nelson Mandela, is a squalid, cramped and crime-infested black township. Many of its residents stream into Sandton every day on a bridge over a highway to work in upscale shops or homes.

Angry protests flared in Alexandra last month, stoked in part by campaigning for Wednesday’s national election but mostly by the frustration that South Africa should look far different than the country of haves and have-nots that it has become. Many voters believe the ruling African National Congress has lost its way since Mandela won the first post-apartheid presidential election in 1994, and that belief threatens the ANC’s absolute majority grip on power.

The ANC has been shaken by widespread allegations of corruption that saw former President Jacob Zuma forced out a year ago, and many South Africans feel the party can no longer coast on its legacy of fighting the brutal system of apartheid.

Unemployment in the country of 56 million people soars past 25%. There are tire-burning protests almost every day over the lack of basic services like working toilets in mostly black neighborhoods. Whites still hold much of the wealth and private levers of power, while blacks trim their lawns and clean their homes.

“We find virtually no whites living below the middle class,” Fazila Farouk and Murray Leibbrandt with the Southern Africa Labor and Development Research Unit wrote last year. “Whites have, in fact, comfortably improved their economic status in post-apartheid South Africa because our economy channels such a big share of national income to the top 10%.” 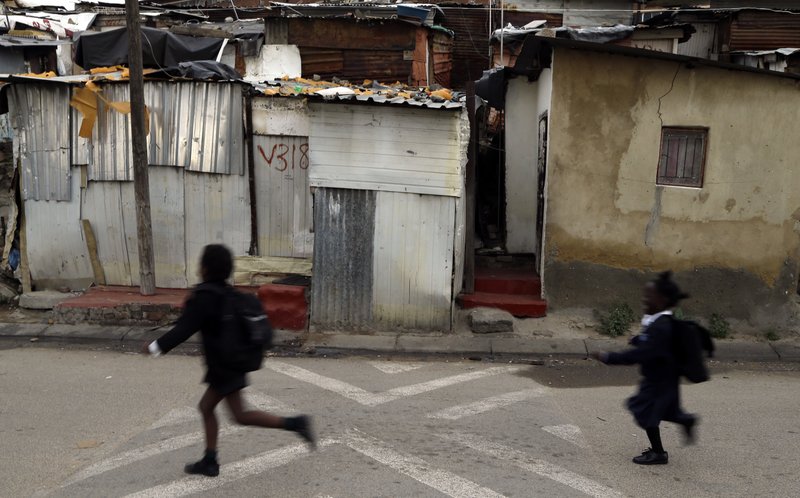 FILE – In this April 22, 2015, file photo, children run to school in Alexandra township in Johannesburg, South Africa. Twenty-five years after the end of apartheid, inequality is still on display in South Africa. The frustration could play out as the country holds a national election on Wednesday, May 8, 2019. (AP Photo/Themba Hadebe, File)

Half of South Africans are in households with per capita income of 1,149 rand ($90) or less a month, they wrote, with little chance to change their fortunes despite working hard as maids or security guards.

Thembeni Manana, an activist who works with the Greater Alexandra Chamber of Commerce, knows the feeling well, describing the inequality that residents of Alexandra feel when then cross the highway bridge into upscale Sandton.

“The air in Sandton is so fresh, you could swear they have air-cons outside,” Manana said, referring to the air-conditioned high-rises in the wealthy enclave. “When you come back to Alex, yo! A most disgusting smell! A sewer that’s overflowing, rats all over the road.”

The 28-year-old helped coordinate last month’s protests, saying that the challenges in righting the inequality are more than cosmetic, more than huddling through power outages in Alexandra while the Sandton skyline glows, unaffected.

“With us, we decided enough is enough. We want to challenge the system,” she added.

She delivered a rapid-fire list of demands: Schools in Alexandra should have a ratio of 30 children per teacher instead of 70. Street vendors should be allowed to supply grocery store chains, giving them access to the wider economy. Children should be able grow up with both parents in homes that have more than one room, allowing for privacy.

The World Bank says South Africa is the most unequal nation on the planet, a fact that former President F.W. de Klerk, a Nobel Peace Prize winner, called “the deepest national shame.”

It’s cutting criticism by someone who oversaw the end of a system that chilled much of the world by segregating its people by the color of their skin. Current President Cyril Ramaphosa, a Mandela protege, doesn’t shy away from the critique. 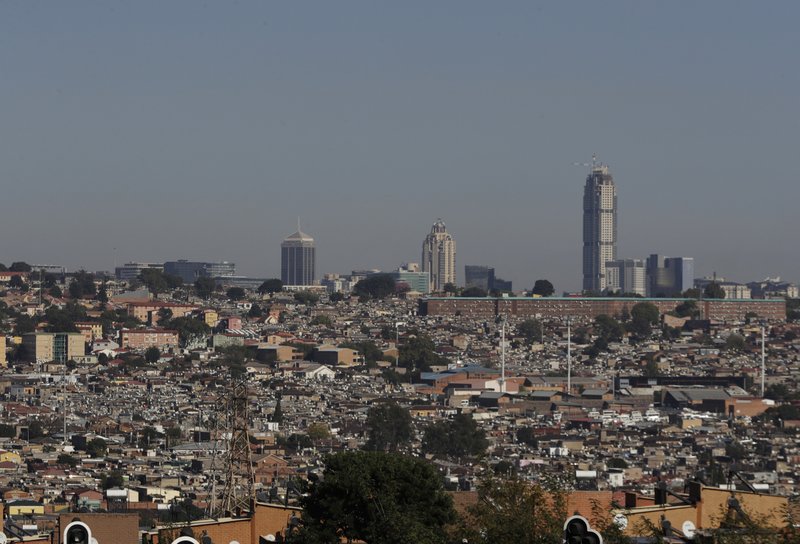 This May 1, 2019, photo, shows Johannesburg suburbs of Alexandra, foreground, and Sandton in the background. Twenty-five years after the end of apartheid, the neighboring suburbs are a stark example of how inequality is still on display in South Africa. (AP Photo/Themba Hadebe)

“Ours is still a deeply unequal country,” he acknowledged last month in marking 25 years since the end of apartheid .

South Africa’s “disturbing” wealth inequality is even more striking than its income disparity, and it threatens democratic values, according to a committee that explored the idea of a wealth tax. Such a tax might help but likely would not change the social relations that create inequality, said Aroop Chatterjee of the Southern Center for Inequality Studies at the University of the Witwatersrand in Johannesburg.

As Ramaphosa wages war on corruption within an ANC divided into the allies of Zuma, the former president, and those who want reform, public exasperation grows and populist movements simmer .

Grievances like those cited by Manana are not limited to Alexandra but exist in many of South Africa’s black townships, and Wednesday’s election likely will reflect the weariness of asking again and again for change.

While South Africa was famous for its long lines of voters in the first post-apartheid election 25 years ago, the sense of national apathy is an ominous sign for the ANC.

“I think people are just tired of voting,” Manana said.

“They realize the character of the political parties, only out to play during election time,” and then disappear until the next balloting five years later, she said.

The Latest: R. Kelly back at hearing in sexual abuse case