The Lagos State Police Command has confirmed the recovery of four bodies from a septic tank in Ikorodu area of Lagos.

A statement released by the command’s spokesperson, DSP Bala Elkana, says the bodies were recovered following a report of two bureau de change operators who went missing on March 14.

The statement in part reads

“On March 14 at about 5.30p.m., the Lagos State Police Command received a complaint from Ikorodu area that some unidentified persons approached one Alhaji Yakubu Musa and Alhaji Hassan Umaru, both operators of bureau de change at Benson area of Ikorodu and informed them that they had a relation who returned from overseas and needed to exchange $10,000.

“They initially said that payment will be made at a bank at Ikorodu; but on getting to the bank, the suspects moved the operators to an unknown destination and started demanding for ransom from their friends and relatives.  That despite paying the sum of N1,600,000 as ransom, the abductors refused to release the victims and nothing more was heard of them. The victims’ phones remained switched off. 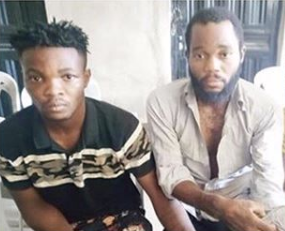 “The Commissioner of Police Lagos State, CP Zubairu Muazu, detailed the Commander, Special Anti Robbery Squad to do an in-depth investigation into the matter with a view to rescue the victims and apprehend the suspects.

“Operatives from SARS Ipakodo base led by SP Godfrey Soriwei arrested three suspects, namely, Oluwatosin Olanrewaju, Mayowa Olawuni a.k.a General and Babatunde Idris a.k.a Aloma. The suspects confessed to the commission of the crime and led operatives to their den in Ikorodu where they dumped the corpses in a septic tank.

“Investigation revealed that the suspects had, at various times, used an abandoned company premises as their den, where all their targets were killed and dumped in the septic tank,” he said.

Elkana said as part of the investigation, four decomposed bodies were recovered from the septic tank for autopsy. Bala added that the suspects confessed to have also killed two rival cult members and dumped their bodies in the septic tank before killing the two bureau de change operators.

“They are currently assisting the Police in the arrest of fleeing members of their gang. Investigation is ongoing, and suspects will be charged to court as soon as investigation is completed,” he said.