Breaking News
‘Fourth Lagos Mainland Bridge will meet standard’
Nigerian man cries as he narrates what NCDC...
I am not Fela, leave me out of...
Education Secretary arraigned for fraud in school feeding...
Obasanjo never met Mimiko on support for PDP,...
Customs killings: My people may fight back, says...
#Debates2020: ‘Don’t use the word smart with me,...
Setback for 774,000 Public Works jobs take off...
Reps withdraw water bill as lawmakers clash
FG recovers N700bn through whistle blowers
Home News “He fought a real war. I am a testimony to that” – Psychologist reveals late Akachi asked him for help
News

“He fought a real war. I am a testimony to that” – Psychologist reveals late Akachi asked him for help

A University of Nigeria Nsukka graduate and Psychologist, Ofe di Oku, has revealed his attempts to help the late Akachi before he unfortunately took his own life.

“People don’t just wake up in the morning and commit suicide. One hardly find such in story rails. Suicide is a deliberate planned act. It’s a sort of last resort especially to people suffering depressions and other forms of psychopathologies.

Most people that commit suicide have already planned out how to achieve this aim, where and when it should be carried out. Some give no chance for help till is carried out.
Here in UNN, by miracle I meet them in hidden places and at a specific time. Vet mountain, social science quadrangles, those buildings on your way to green house, some exculded parts of stadiums. Mostly by 12pm, 2am, 3pm, 10-11am, and at the wee hours of the morning.

In my second year I met a handful of them. This is because I always go home from 12am-5am, sometimes I go to morning mass at St. Peter’s very early by 4am, some other times I go to midnight prayers at lawn tennis court or visit the vet mountains for other needs mostly during the mid hours of the day. I met some in tears and others in a sober mood.

I’ve a fellow survivor that told me, I planned dying on my graduation day at a specific hour in a specific location. I’ve to employ the aid of Dr. Amah Benedicta and now she’s doing well.

Why did I write this. Human beings are delicate beings. No matter how much strong you claim to be, one thing must break you and your way of coping might not be your neighbors way of coping.

We have diverse ways of coping with stress and emotions. We all don’t have strong and healthy coping and emotion regulating mechanisms. Help those with faulty coping strategies. Be of help to them, don’t criticize them, don’t tell them where they should and should not be.
Goodnight” 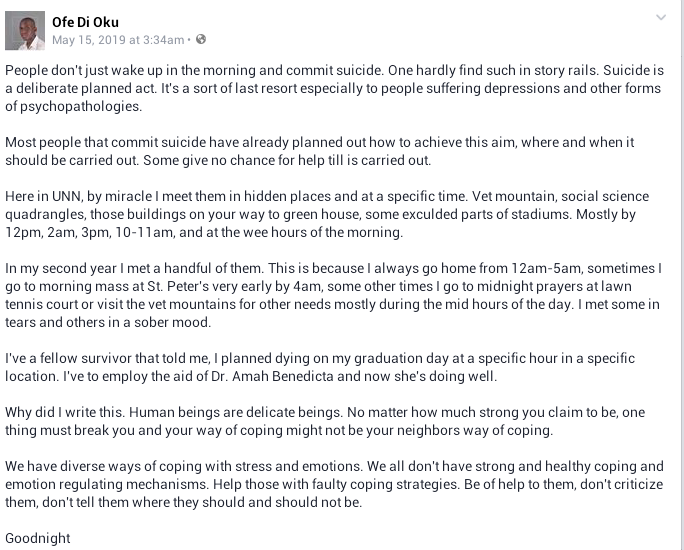 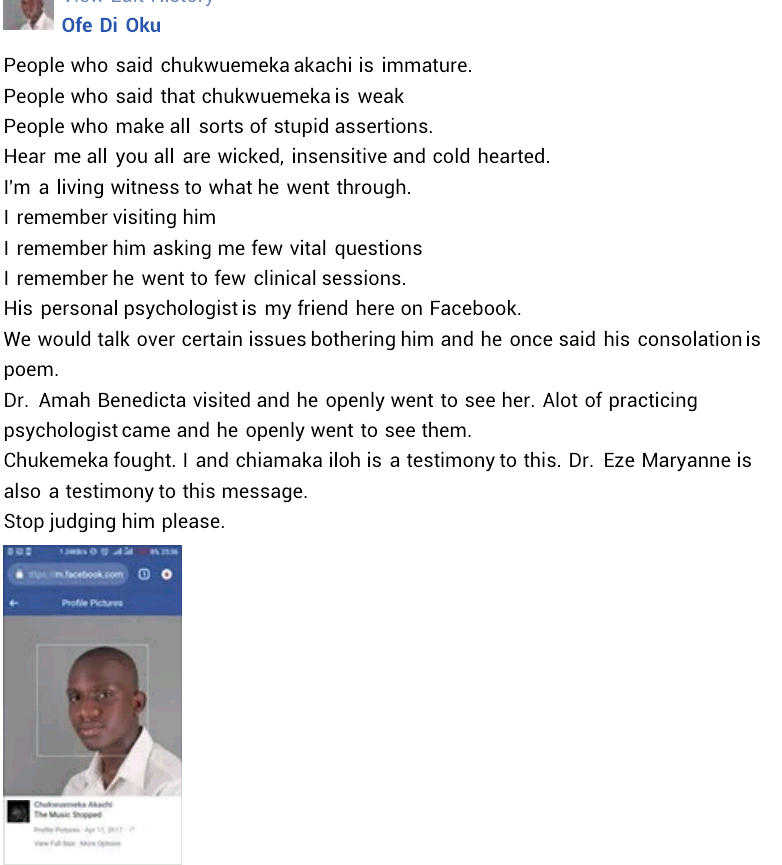 ‘Nigerians are afraid of having proper sex’ – Sex therapist, Adunni

Nigerian man cries as he narrates what NCDC...

Customs killings: My people may fight back, says...