A woman is lucky to be alive after being thrown out of a speeding vehicle in Lagos.

Ifeoma Nwaoma boarded a commercial bus at Iyana-Ipaja around 2pm on Friday. Unknown to her, it was a bus operated by criminals known as one-chance. Four men and an elderly woman were already in the bus before she got in.

Shortly after the bus zoomed off, she sensed she had entered a one-chance bus and asked to be dropped. But the driver increased his speed. She was then threatened with death after which her bag was collected and they threw her out of the speeding bus. 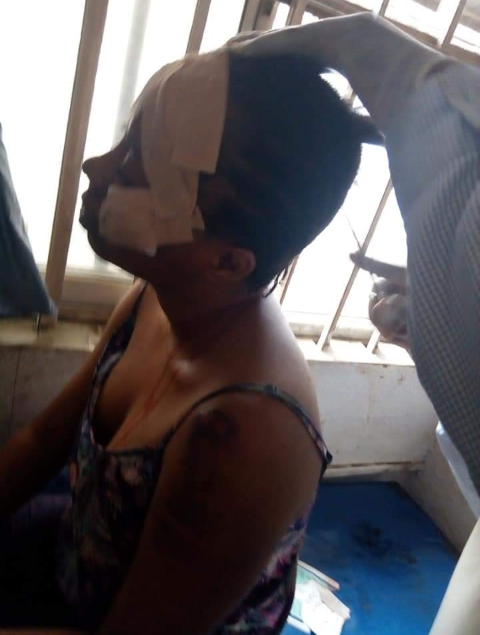 She lost consciousness and woke hours later to be informed that she went into a coma and it was a good Samaritan who found her and brought her to the hospital. She was told she would have died if she hadn’t been brought in for treatment immediately. 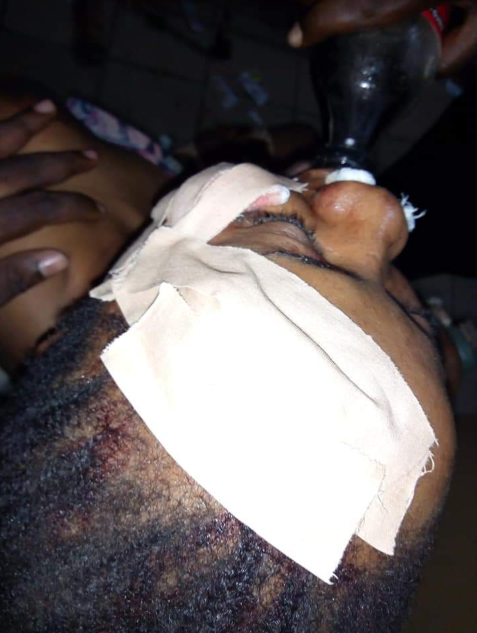 The victim suffered horrific injuries to her head, face, arms and shoulder when she landed on the hard pavement and she shared photos of her injuries to go with her story. 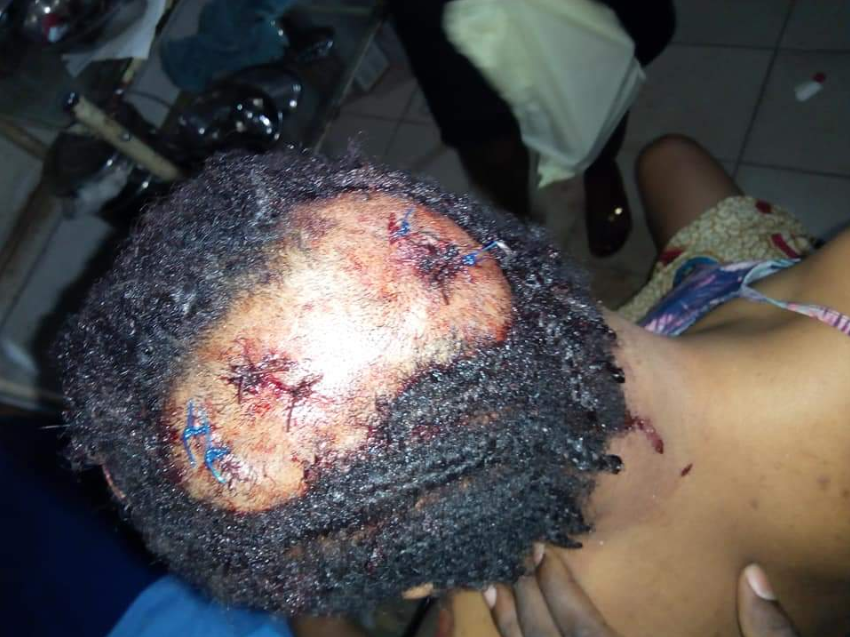 i boarded a Public bus (Mini bus) from my busstop Enrout to ilekpo Market Lagos, where   i Wanted to buy Food Stuffs.

Just Few Minutes drive from where i boarded (iyanakpaja) i Realized i have Entered a Wrong Vehicle. (ONE CHANCE PRECISELY ).

Drop Me here i Shouted & Shouted but the Driver increased his Speed instead . A total Number Of 5 Passenger’s were in the bus already (4Men & One Elderly Woman). Shut Up your Mouth Or we kill you here they all Echoed in Agreement.

Before i knew what was Going On they have Forcefully taken away my handbag ,and Pushed Me Out Of the Speeding Car. That was the Least i Remembered.

i Woke Up in the Hospital after Many Hours Of Unconsciousness (Coma). And Was told that Some Good Samaritans Carried Me to the Hospital were i was Giving Urgent Medication & Attention.

This are the Exact Words Of the Doctor ” IF YOU WEREN’T HERE AS AT THE TIME YOU WERE BROUGHT, I’M AFRAID YOU WOULDN’T ‘VE MADE IT”.

Bcuz i actually hittd My head and my Chest(breast) against the Culvet, and My Skull got broken with Many bruises On my body !
NOW THIS IS THE TESTIMONY:

(2)There was no Coming vehicle, else i would’ve been Crushed when i was Pushed Out of the Car. Bcuz this is a busy Speed lane that Never lacks Cars On it.

(3)The Driver was leta Apprehended as his Culprits Asconded .My phones were Recovered with Other Valuables .

(4)Above All , My Precious Life was Spared. Atleast I’m very Much alive to Share this Testimony My Self. The Enemy Meant it for Evil but Jehovah turned it to My Favor. That’s why i Call this God :

The Great Oracle that turns Upstacle into Miracle . My Life Keeper. Miracle Working God . Ever Loving ,Ever Living & Ever Caring God .The Master Planer. The Game Changer. The all knowing God. The God of all flesh. ETC..(Call him any Name Of your Choice plz)

Lam 3:37: Who Can say and it Come to Pass when God has not Commanded ? Nobody My brothers/Sisters. Indeed they planed My Death but the Master Planner Changed Dia Game plan and Gave Me Life Even More Abondantly(Jh 10:10).

I Return all Praise to God Almighty for Sparing & Saving My life . i Stand On (Ps 118:17) and Say , “That i will Not Die ,but Live to Declare the Lords Goodness in the Land of the Living . Amen.

MESSAGE  TO MY ENEMIES :
Hear Me My Enemies, ” I’m too Defended to be Defeated . I’m too Surrounded to Surrender. I’m too Fortified to be Terrified. I’m too blessed to be Cursed. I’m too Anointed to be Molested. I’m too Protected to Die like a Chicken. And I’m too Graced to be Disgraced. Bcuz you Can’t kill God,  YOU CAN’T ALSO KILL ME BEFORE MY TIME . Amen & Amen.
And for you reading this post you will not die suddenly. IJN Amen!

The Life Of IFYJESUS ,
I’m a Product Of Grace ,
If you touch Me by Mistake you Die by Correction ,
Heartofgratitude #

Ifeoma’s experience happened just days before another lady named Abimbola Ayanwale Modinat was tossed naked out of a moving bus by one-chance bus operators (read here). Sadly, Abimbola did not survive it. 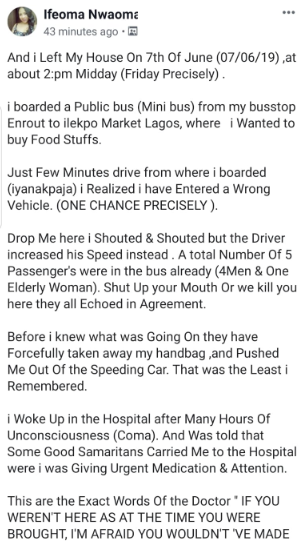 Female lawmaker in Kenya beaten up by male colleague (Photo)