Bella Thorne decided to take her power back from a hacker by releasing her naked photos herself.

The 21-year-old actres received messages from an unknown person who had series of her own topless photos and videos after hacking her phone. The hacker threatened to make the photos public.

In most of the photos, Bella is seen naked from the waist up with her nipples on display.

Rather than let the hacker shame and blackmail her, Bella released screenshots of the conversation with the hacker’s phone number on display.

The screenshots show that the hacker sent Bella a topless mirror selfie and the message: “Wya [where you at] smh [shake my head]”.

Bella replied: “Feels so weird someone I don’t know looking at my personal s**t.” 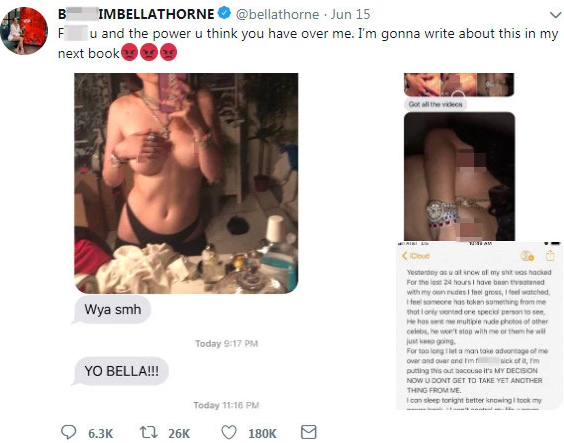 A second screenshot shows more photos and videos of Bella alongside the message: “Got all the videos.” 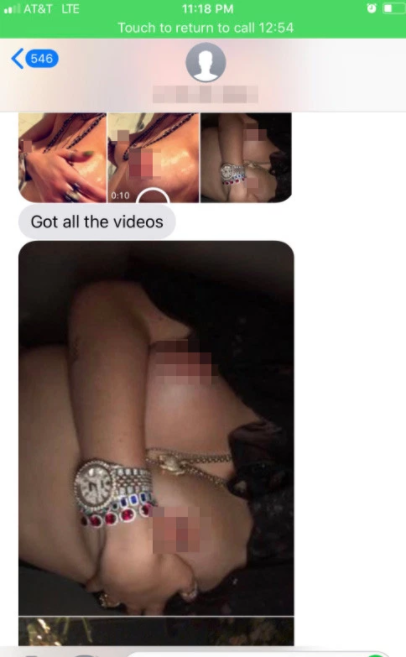 Bella released the topless photos and wrote a heartfelt message, revealing that the hacker also had indecent images of other celebs.

The message reads: “Yesterday, as you all know, my s**t was hacked. For the last 24 hours I have been threatened with my own nudes – I feel gross, I feel watched, I feel someone has taken something from me that I only wanted one special person to see.

“He has sent me multiple nude photos of other celebs, he won’t stop with me or them he will just keep going.”

“For too long I let a man take advantage of me over and over and I’m f***ing sick of it.

“I am putting this out because it’s MY DECISION NOW, YOU DON’T GET TO TAKE YET ANOTHER THING FROM ME.

“I can sleep tonight better [sic] knowing I took my power back. You can’t control my life, you never will.

“Here’s the photos he’s been threatening me with, in other words, here’s my boobies.

“So here, f*** you, and the last 24 hours I have been crying instead of celebrating my book while doing my book press.”

“Oh yeah, the FBI will be at your house shortly so watch your motherf***ing back.” 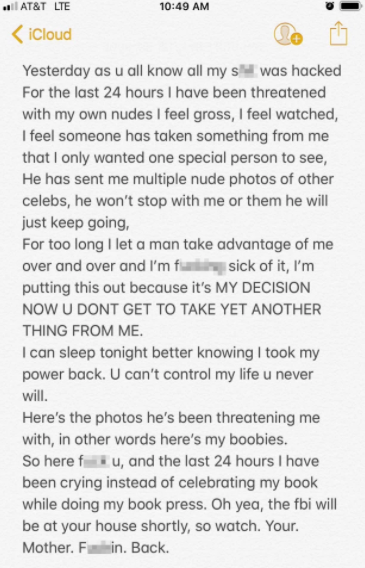 She captioned the three images: “F*** you and the power you think you have over me. I’m going to write about this in my next book.”

Fans have praised Bella for the way she handled the situation.

Abuja based lady calls out Don Jazzy’s artists, Rema and D’Prince for refusing to ‘pay’ her after spending the night at their hotel rooms