“Church is a business. Most pastors are fake” – Former pastor exposes a number of things he experienced in the church including “jujuism”

A former pastor has exposed a number of things he experienced during his years as a pastor and why he decided to distance himself and his family from religion.

Al Akhigbe said he was “a pastor for more than 15 years”. He said he had to leave because the church was “so blatant in the perpetration of evil” and it “was discomforting to him”.

He said that inspite of the priviledges and money that came with being a pastor, he left because “as important as money is, it has never really defined his life.”

He said that while he was in church, he noticed a lot of evil going on which the church leaders tried to justify it. He went on to refer to the ‘daddy GO’ as “G-hoe”.

He wrote: “As I grew in pastoral ranks, I discovered, to my amazement, that God was just a facade. Everything we did, we did for the G-hoe. Any other thing, we did for greed. And my bible condemns these things.”

He went on to say that the church is just a business and most people who claim they were ” called” are just peple who called themselves.

I made up my mind a long time ago, to distance myself and my family from religion. Moreso, religious leaders like pastors. I don’t care what anyone thinks. It’s a choice I have made.

I don’t hate anyone. But, I don’t accord that ecclesiastical air to anyone. Because, most of them, if not all, are fake. I was myself a pastor for more than 15 years. So, I know. I have my ordination certificate, several awards for meritorious services, made impact both locally and internationally.

But, I saw the deceit, shenanigan, jujuism, scam, abuse, etc and was turned off. I became a lone voice in the wilderness crying against them. Probably, that was the reason they decided to eliminate me.

Agreed, no human or association or group is perfect. But, to be so blatant in the perpetration of evil was discomforting to me. I didn’t care about the privileges. As important as money is, it has never really defined my life. Maybe I’m weird, I don’t know.

I was in the world and knew how to do a lot of bad things. How could I be in the church as a Christian and we were perfecting the act of doing even worse evil?

When I believe something, I believe with my spirit, soul and body. My zeal for the things of God (as I thought they were), made me grow and became a church leader. As I grew in pastoral ranks, I discovered, to my amazement, that God was just a facade. Everything we did, we did for the G-hoe. Any other thing, we did for greed. And my bible condemns these things.

You needed to have known me when I was in church. This post is public and anyone that knew me can come and dispute it if I’m lying. I was always fighting what was against the people. Sometimes, during meetings, I’ll argue with the head pastor, using scriptures. And I will be told that revelation was progressive and that God talked directly to the man with the vision. Meaning: the bible doesn’t have the present information about the present direction of the church.

I’ll have some of my colleagues sent to try and counsel me. My question was always, how can we say we’re children of God and be engaging in acts that were worse than those of the unbelievers? They’ll tell me that there are different levels of grace.

If I tell people I stopped pastoring, they’ll be like, “how is that possible? Were you not called before?”

That’s why I laugh when people say, a church has a board. Which kind of board is a board that is selected by the pastor and CEO to act on his behalf and as a semblance of public organisation? Do you people reason at all?

Quite frankly, it’s a feat to be able to pull out of a church congregation. It’s even a greater feat to resign from a pastoral profession.

It’s not easy isolating from people that have become family and friends. But, I had to do it for my conscience sake.

I resigned and pulled out. And since then, about 5 years ago, I’ve never been more at peace with myself. I hope to take out time to write a book on this very soon. It will be a biography. Names of people, places and events will be mentioned.

I had wanted Pastor Anita to write it herself. Let the world hear her own side of the story. But, I guess they succeeded in gagging her with legal technicalities and she might not be able to.

Well, she is not me. There ain’t no stopping me if I set my mind to do something. I don’t mind stepping on and hurting toes. 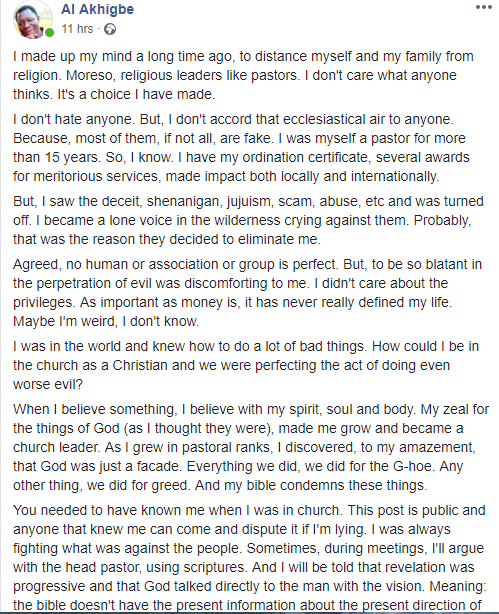 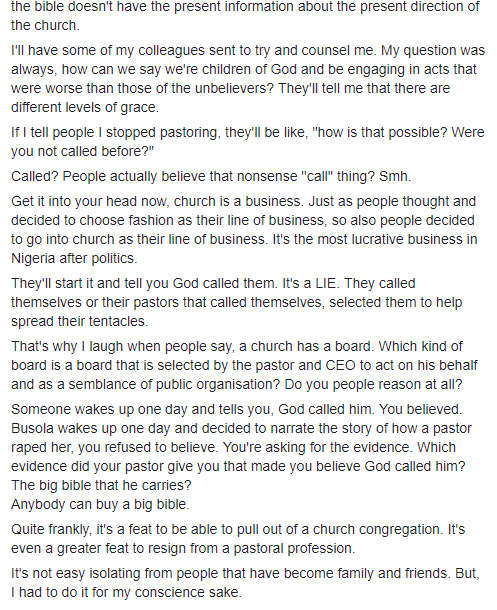 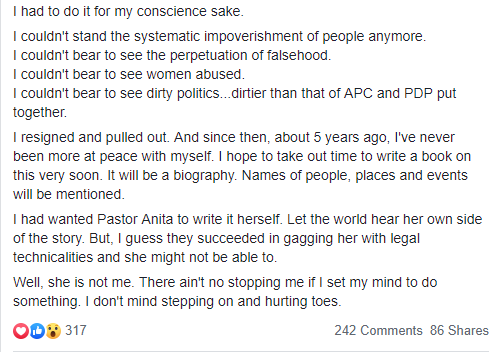