Cossy Ojiakor has called out Nigerian journalist, Tunde Moshood who she claimed was cheating on his wife with her arch-enemy, Halima Abubakar.

Promising to drag Tunde Moshood and Halima Abubakar till they sue her, Cossy Ojiakor narrated how the journalist allegedly ejaculated on her while giving her a ride in his car. She wrote;

Hahahhhah cheiiii so @tundemoshood_tm the journalist that like sleeping with animal especially Dog was arrested by SSS .. haha abi u think everybody is cossy dt u can tarnish and get away with cheeiiii karma isaaaa bitch… I just checked online to find his pix and this came up. Anyway he has a very big dick. ( he brought it out in the car stroking it while asking me question before giving me the passport abimbola sized…then he grabb my boobs when he was about coming. He came all over his car… it’s was a messy site) his ogar with micro dick wan do and his boy boy with big dick wan do …. cheiii Is it still big.?

U were just cheating on ur wife wey Dey Dublin that year like crazy. I hope u don’t cheat on ur new wife  the dick big oooo atleast ur new wife can confirm that am a true teller … Or was I looking at it from a young girls perceptive. … well if u don’t fuck dog tunde sue me …….u motherfuckers should reply me naaaaaa. I wonder why them no get fuck u sign for Emoji … I just pray that God will give me heart that forgives because if u hurt me deep down ordinary sorry no go do….. May be little things like frog jump will soften and erase the hurt  tunde moshud is a dog fucker … sue me or accept ur fate as a useless dog fucker 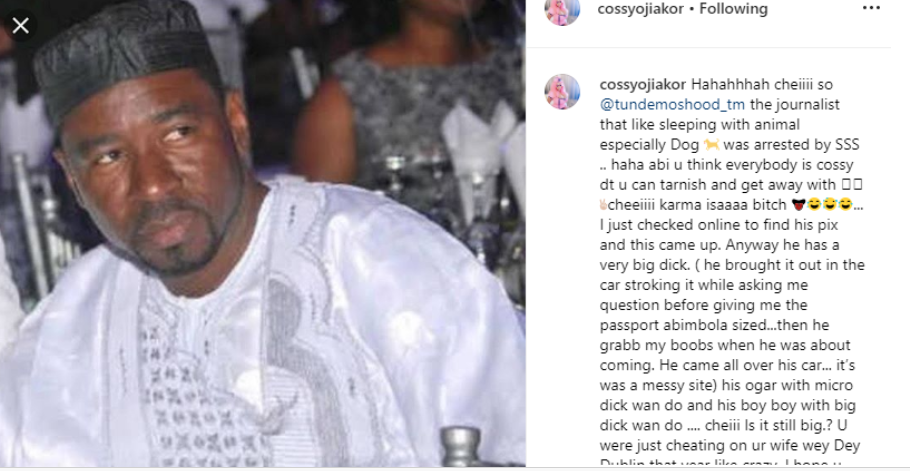 Tunde @tundemoshood_tm isaaa fine boy iyaaa iyaaaa yooooooo…. halima journalist boyfriend wey finish me that year …,Fine boy big dick wey get pimples and heavy green veins…,,,how market @tundemoshood-tm ur magazine .. THE ENQUIRER nko….. hahhhaha guess I was the only story u guys had…. now ur magazine done die…….. wow it was one time the hottest….., how much did u make sef…. cheiii una burst my brain that year …..but how does it feel fucking dog.

I bet guys that fuck animals get disease from it… like those pimples in ur dick ….it is bad ooo stop fucking dog. this one wey sss Dey arrest u I hope u no Dey kill person too… Biko if ur a killer let me know in time so I can become afraid and delete ur pix u hear. pls someone should tag him it’s like that is not his real account . As you finish my career …I think say by now the Enquirer go done go international. it still died ….  to find ur pix sef na war… 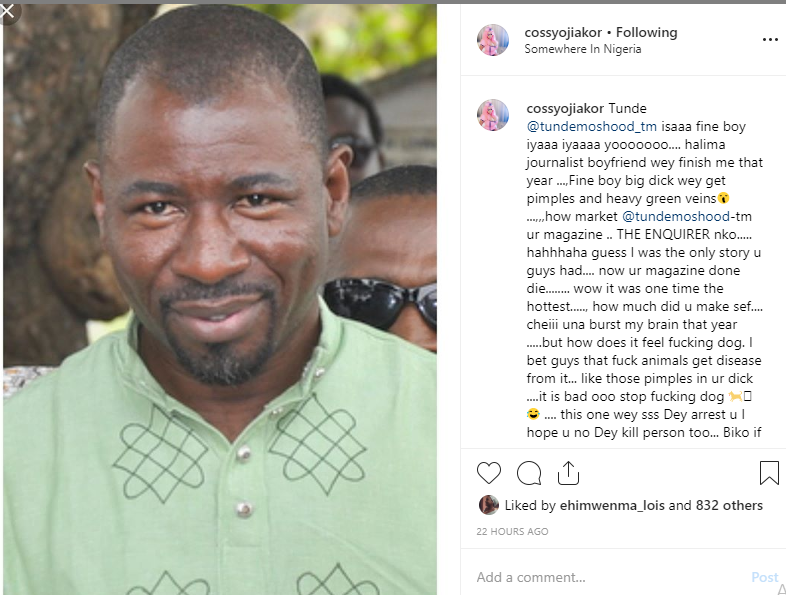 Cossy also recounted how Halima Abubakar reportedly became envious of her after she bought a land in Lekki area of Lagos, hence the dog-story story;

Hahhaha who Remember’s this story….. it’s always according to the source…(halima Abubakar) it changed my life… career and outlook in life … from 30 k paid to me to act them turn am to $10000 well it was my fault . I just managed to buy a waterlogged small piece of land for Lekki area back then which I no even pay once  I told halima about the area and encouraged her to get one around there which was very cheap and that the Baale May his soul Rest In Peace can collect installments payment. !!!!!ohhh she got a land in Lekki….. fuck how did she get it. !!!!! My dear na half plot ooo in a bad neighborhood sef.

The envy started burning. Yeah I had some friends in top places but I prefare being just friends so I can be family but to her I must be fucking plenty people …..Then they cooked up story… Aids… Porn….dog….so this picture here is the naked picture they told me about? I was told they had my naked picture that I should pay. I was Even told that I acted in blue film…. my mind come hang I had to call my boyfriend back then to ask him if he recorded any of our sex rumps. Anyway I started seeing all guys as suspect that want to video me naked … Fuck they messed up my mind…. am just a product of all I have been through. .

Then I decided to naked my naked all by my self ..,,,Well I took up the bad girl role and say fuck it.. this was a film already out in the market. And tunde moshud the owner of such big magazine because of halima sweet pussy and Ambimbola David decided not to watch the movie but went ahead to write the inhuman story. All die na die… it’s better u know ur enermies so if anything happen police will know where to start checking 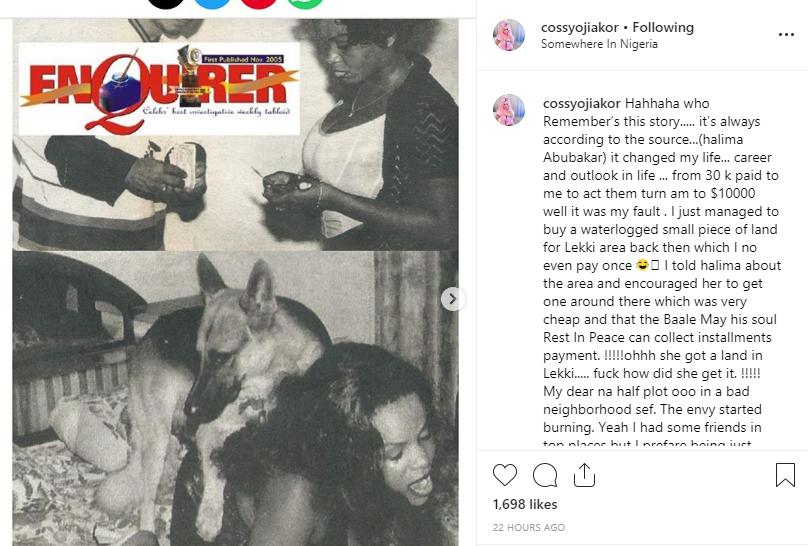 Obasanjo writes another letter to President Buhari, says “criminality is now being perceived as a Fulani menace’