Breaking News
JUST IN: APC nullifies suspension of Fayemi, Ojudu,...
Former investment tribunal members were an embarrassment –...
FG gets $2.1m from US government for COVID-19...
We determine those who visit our country –...
I have no plans to return to APC-...
APC suspends Governor Kayode Fayemi
30 injured, 23 buildings, event centre, vehicles razed...
Insecurity threatening the existence of Nigeria – Gbajabiamila
Nigerian collecting illegal $36,000/month from ship owners –...
Fat thighs and big hips could lower chances...
Home News Fasten your seatbelts, I warned you against Buhari- Fayose says as he reacts to Fasoranti’s daughter’s death
News

Fasten your seatbelts, I warned you against Buhari- Fayose says as he reacts to Fasoranti’s daughter’s death

The former governor in a tweet posted this afternoon, stated that he warned Nigerians against re-electing President Buhari. He wrote

Nigerians, may God save us in this “Next Level” of Killings, Kidnappings, Joblessness, Poverty, Cluelessness and Recession…Fasten your Seat Belts. Remember I warned against Sai Buhari! Mo ke to o! Baba Fasoranti, I sympathise with you and other Nigerians. God will console you. 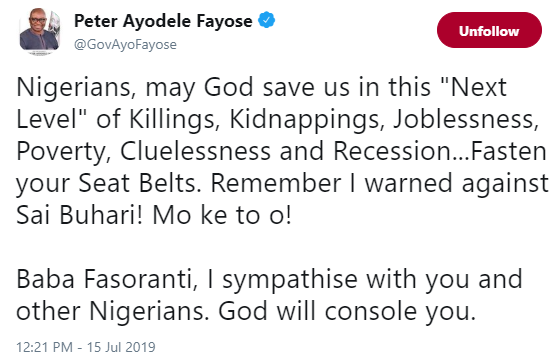 How long are we going to use our blood to sustain Nigeria’s unity? – Afenifere Renewal Group