The 22-year-old Spanish footballer shunned rivals Tottenham to sign for Arsenal as he looks set to improve their midfield.

After sealing the deal on Thursday afternoon, Arsenal manager Unai Emery said:  ‘We’re excited to see Dani join us. He is a talented player with big technical ability, creativity and precision.’

Ceballos, who has been handed the No 8 shirt also expressed his excitement and explained why he had picked Arsenal ahead of Spurs: ‘I knew I had the confidence of the coach, which was very important for me from the start. 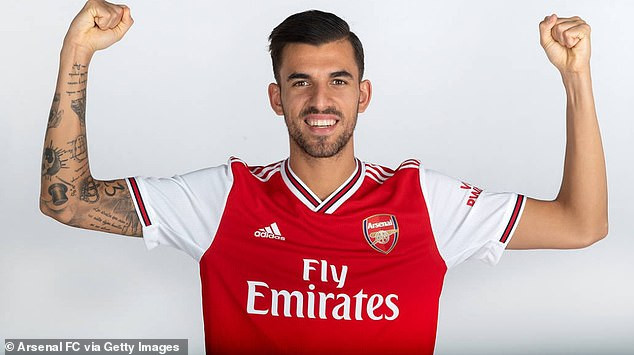 ‘I was aware of the responsibility that wearing this shirt entails and it was a tremendously proud moment when I decided to join Arsenal.

‘The coach was the turning point in terms of me joining this massive club. He’s a Spanish coach and he knows me from my time at other clubs.

‘I’m really happy to be able to help Arsenal achieve our objectives.’

The 22-year-old also made it clear that Hector Bellerin had had a role to play in his decision to join: ‘I get on really well with Hector away from football, on a personal level.

‘I told him I was thinking of joining and he told me not to think twice because this is a great city and a great club and that I was going to have a great time.

‘I can’t wait to see him and say thanks for his help in getting me here.’