Civil society organisations, lawyers, human rights activists on Tuesday joined other Nigerians to knock the Federal Government and the security agencies for clamping down on the #RevolutionNow protesters on Monday.

They also flayed the government for the continued incarceration of the convener of the #RevolutionNow protests, Mr Omoyele Sowore, who was being detained by the Department of State Services for “threatening national security and public safety.”

The CSOs including the Civil Society Legislative Advocacy Centre; the Socio-Economic Right and Accountability Project and 49 other civil society organisations on Tuesday faulted the manner with which the Nigerian authority clamped down on the protesters on Monday.

But despite growing opposition to his continued detention, the DSS on Tuesday applied to the Federal High Court in Abuja for an order to allow it keep Sowore for 90 days.

Also, the police on Tuesday arraigned six persons arrested in Lagos during the #RevolutionNow protest on Monday on two counts bordering on unlawful assembly before the Lagos State Magistrates’ Court in Ebute Metta.

But the SERAP, CISLAC and 49 other civil society organisations on Tuesday said the nation’s constitution allowed Nigerians to take part in non-violent protests.

The groups made their position known in a statement they jointly signed on Tuesday.

The statement read, “We are gravely concerned over the unlawful statement issued by the authorities of the Nigeria Police Force threatening to prosecute the organisers of the peaceful rallies in Nigeria.

“There are existing provisions of the law and judicial authorities recognising the fundamental rights of the Nigerian people to non-violently convene and participate in rallies, demonstrations and protest marches.

“Fundamentally, the provision of the 1999 Constitution of Nigeria as amended that ‘every person shall be entitled to assemble freely and associate with other persons…’ is sacrosanct and must be protected.

“We, therefore, call for restraint of arbitrary misuse of power against the citizens for a non-violent protest, demonstration to express their views.

“We demand immediate release of all activists who are in detention for exercising their fundamental rights.

“We call on security agencies and government officials to ensure total compliance to the rule of law as provided for in our legal system.

“We also call on government to respect and allow the flourishing of civil space for meaningful contribution to democratic governance in Nigeria.

“We further call on government to be more accountable and responsive to the citizenry they were elected to serve for good governance”.

“ Groups that signed the statement include the Centre for Democracy and Development; Centre for Democratic Research and Training; Civil Society Network Against Corruption; Human and Environmental Development Agenda; Public Interest Lawyers League and Partners for West Africa – Nigeria.

Also, the chairperson of Transition Monitoring Group, Dr Abiola Akiyode-Afolabi, on Tuesday condemned the clampdown on protesters by security agencies.

According to her, the Federal Government must be above board in its disposition to the respect for fundamental human rights.

Speaking with The PUNCH, she said, “Clampdown on protesters shows the intolerance of the current government to freedom of expression and peaceful assembly. There is no justification for clamping down on harmless protesters with tear gas and other weapons.

“Some of them were seen wounded and assaulted. The Federal Government must be above board in its disposition to the respect of human rights. The arrest of Omoyele Sowore without trial is a reminder that we are far from being in a democracy and that the country is free from vestiges of the military era.”

Also activist lawyer, Mr Jiti Ogunye, described the clampdown on the protesters by the police as unlawful, saying the court had repeatedly condemned such clampdown by the security agents.

Ogunye said, “By our criminal law, by the provisions of the constitution that guarantee the right to freedom of expression, protest and demonstrations, Section 39, and the right to form an assembly, Section 40, what the police did was illegal and unconstitutional; it is irresponsible.

“People were saying they were being proactive, proactive about what? Those who overthrew government in the past in this country, did they do it by protests? Historically in Nigeria, have you heard of a government overthrown by protests?

“The police know they don’t have the right to clamp down on the protesters. They are just behaving like a Gestapo police, who are hard of hearing and who have lost their sight. The court has repeatedly ruled on this issue.

“A police officer in Lagos, who led the disruption of the gathering, said it was an unlawful assembly because the protesters didn’t get a permit. Aren’t these people educated? Don’t they have lawyers? If they don’t have lawyers, don’t they read newspapers or watch television? The courts have ruled on this matter, that it is anachronistic to be talking about police permit and that the duty of the police is to protect those who are engaging in a procession, such that mischief-makers will not hijack the procession and cause mayhem.”

Similarly, the National President of the Committee for the Defence of Human Rights, Mr Malachy Ugwummadu, described the clampdown on the protesters as an abuse of fundamental rights of citizens, which the civil society would resist.

He said, “Under the constitution, and I am referencing sections 39, 40 and 41, we all have our fundamental rights to freely express ourselves, to freely assemble and to move freely in the country; and therefore, if a people have decided to exercise these rights, then it is unconstitutional and illegal for government institutions and law enforcement agencies to clamp down on them.

“The CDHR, which I lead, has made a clear statement that Omoyele Sowore should be released forthwith. The use of the revolution cannot be approximated to mean treason that they are alleging against him. President Buhari himself in 2015 came out with his party to say that the victory they recorded was a democratic revolution. In the days to come, the Nigerian government will hear from the civil society on what is going on in our country.”

On his part, the Executive Chairman, Centre for Anti-Corruption and Open Leadership, Mr Debo Adeniran, said while he was not surprised that the police would clamp down on the protesters, because of the use of the word ‘revolution,’ the police should have exhibited decorum in their approach.

He said, “There should have been decorum by the police knowing that the protesters were not armed, even when they talked about revolution, they have not been caught with cache of arms and ammunition and except new information is provided, nobody has said that they were setting up a private army or that they were consulting with the enemies of the state from within or outside the country with a view to destabilising the government. So, what we expect is that nobody will be charged with treason or treasonable felony.”

But the Peoples Democratic Party on Tuesday urged President Muhammadu Buhari to release all political prisoners in the country.

The PDP National Chairman, Uche Secondus, spoke in an interview with journalists in Yola according Channels Television 8pm news monitored by one of our correspondents.

He stated that it was undemocratic for Buhari’s administration to still keep political prisoners, adding that Buhari should allow democratic culture including freedom of expression by citizens to prevail.

He said, “President Buhari should release the political prisoners. It is not done in any political/democratic dispensation. He should quickly and urgently release all political prisoners and allow a democratic atmosphere to thrive in the country, the way everybody will be guaranteed the freedom of speech.”

Also, presidential candidates and aspirants of some political parties that participated in the 2019 general elections and the Ohanaeze Ndigbo Youth Council have called for the unconditional release of the Presidential candidate of African Action Congress, Sowore. 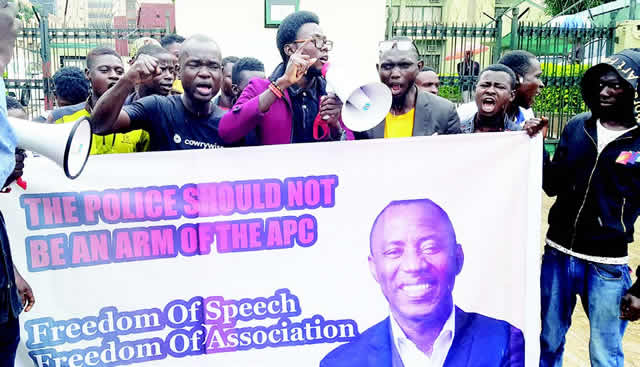 The candidates and aspirants under the aegis of ‘Third Force’ made this call via a statement signed by seven of them on Tuesday.

The statement, which circulated via electronic mail, said President Muhammadu Buhari should be reminded that the Nigerian constitution did not allow violation of human rights.

The statement said, “We, the Coalition of former 2019 Presidential Aspirants and Candidates, under the aegis of Third Force Forum, hereby demand the unconditional release of one of our compatriot, Mr Omoyele Sowore, who was arrested by an agency of the government on August 2, 2019, pursuant to plans for a protest march across Nigeria; which is within his full constitutional rights.”

Also, the leadership of the Ohanaeze Ndigbo Youth Council has said Sowore’s arrest is capable of causing national unrest.

The President-General of Ohanaeze Ndigbo Youth Council, Okechukwu Isiguzoro, stated this in a statement in Abakaliki on Tuesday.

The group noted that contrary to what the DSS had in mind by arresting the political activist, his continued detention was rather turning him into an international figure.

Meanwhile, the African Democratic Congress and the Social Democratic Party have berated security operatives for using force to disperse protesters.

In separate interviews with one of our correspondents in Abuja, the ADC National

Publicity Secretary, Mrs Yemi Kolapo, and her SDP counterpart, Mr Alfa Mohammed, said it was wrong for the security operatives to have used brute force to disperse the protesters.

Kolapo said, “Dispersing protesters with gunshots was uncalled for. It is unacceptable. What this means is that, like the shabby handling of the killings associated with herdsmen, those in the position of authority do not care about the lives of people they are meant to protect.

“Why would you attack harmless citizens that way, not minding the number of casualties? What have they done? They were not violent, so why the violent response? It is sad that we have found ourselves in this situation akin to dictatorship, but what do you expect?”

However, the All Progressives Congress state governors on Tuesday criticised the planners of Monday’s #RevolutionNow protests, saying that the action was condemnable.

They also described the protests as undemocratic, arguing that a revolution had no place in a country that had already embraced elections as the only lawful means of changing a government.

The position of the governors was conveyed by the Chairman of the APC Governors’ Forum, Mr Atiku Bagudu, during an interview with State House Correspondents in Abuja.

Bagudu, who is the Governor of Kebbi State, said the organisers, the “Global Coalition for Security and Democracy in Nigeria,” should have waited for the next round of elections to test their popularity through the ballot box instead of calling for a revolution.

Bagudu said, “Any call for disorder in a democratic setting is condemnable because democracy, as the saying goes, is not the best form of government, but it is the best that we have .It gives opportunity periodically for the electorate to exercise their mandate in affirming or rejecting leaders.

“We have just come through a general election in March this year where Nigerians embraced the leadership of President Muhammadu Buhari and he has been elected for a second term with a little more votes than they had in 2015. Also, state governors were elected in different states; a lot of them for a second term and a number of them for first term. Interestingly enough, we have seen all kinds of democratic outcomes.

“We have first termers defeating second termers and in the case of one state, the Supreme Court, exercised its rights as the highest court in the land to determine what should be and it is respected by the government.”

He claimed that the economy was performing well under Buhari.

If Sowore is charged, Buhari will be my first witness in court because he called for ‘revolution’ in 2011 – Femi Falana