The Nigerian Police Force has described as insensitive, unpatriotic and disrespectful, the press statement from the Nigerian Army, explaining the circumstances that led to the killing of three police officers who were in Taraba state to effect the arrest of a notorious kidnap kingpin, Alhaji Hamisu Wadume.

Frank Mba, the spokeperson of the police force, in a statement released on Thursday night, August 8, knocked the Army for attempting to justify the unprovoked killing of the police officers by men of the Nigerian Army.

Recall that the Nigerian Army in a statement released, said the military officers mistook the police officers as kidnappers hence they were killed during a cross fire. According to the Army, its officers received a distress call that some armed men were attempting to abduct Hamisu. The Army says in response to the distress call, its men stormed the area and fired gunshots at the ”suspected kidnappers.”

Reacting to the Army’s claim, the Police challenged the Nigerian Army on the whereabout of Hamisu who they claim to be the victim of kidnapping. The Police also wondered why the Army officers shot their police counterparts at close range despite the many attempts made at identifing themselves as security agents.

Read the press statement below

The attention of the Nigeria Police Force has been drawn to the Press Release by the Nigerian Army seeking to justify the unprovoked and unwarranted murder of three (3) Police officers and one (1) Civilian, and serious injury to other operatives, who were on legitimate criminal investigation activities to Taraba State, to arrest one Alhaji Hamisu Bala Wadume indicted in a series of high-profile kidnap incidents in the State.

In the best tradition of Esprit de Corps, Inter-Agency Harmony and National Interest, the Nigeria Police Force would naturally have kept quiet, but it has become imperative to set the record straight by addressing the obvious distortion of facts inherent in the Press Release by the Nigerian Army.

Secondly, the Press Release was silent on the source of the alleged distress report or identity of the complainant, on the strength of whose report, the Army claimed had informed their decision to engage in the purported chase and rescue operation. Needless to state that in the true spirit of transparency and accountability, the Nigerian Army ought to have arrested the purported distress caller – if any – for obviously and deliberately furnishing them with false and misleading information. Besides, such arrest should in fact be made public!

Thirdly, it is not true that the Policemen failed to identify themselves as alleged in the Press Release. The video on the incident, now viral, wherein the voice of one of the soldiers was heard loudly proclaiming that the Policemen were from the Force Headquarters, Abuja speaks volume. Besides, the presence of the IRT personnel was well known to the Taraba Police Command as the Operatives officially and properly documented not only at the State Command Headquarters but also at the Wukari Area Command and the Ibi Divisional Headquarters. As a matter of fact, some of the Detectives from the Taraba State Command’s Criminal Investigation Department (CID) were part of the operation.

The Force also considers it insensitive, disrespectful and unpatriotic for the Press Release by the Army to continue to describe Policemen on lawful National Assignment as ‘suspected kidnappers’ long after it had become crystal clear to the Army that these are Law Enforcement Officers who unfortunately were gruesomely murdered in the line of duty by Nigerian soldiers attached to 93 Battalion, Takum.

In the final analysis, we leave the Nigerian Army authorities to provide Nigerians with answers on the following questions emanating from their Press Release:
· Where is the notorious kidnapper, Alhaji Hamisu Bala Wadume ‘rescued’ by the soldiers?
· How and why was Alhaji Hamisu Bala Wadume released by the soldiers?
· How could a kidnap suspect properly restrained with handcuffs by the Police escape from the hands of his military rescuers?
· If Alhaji Hamisu Bala Wadume is a ‘‘victim of kidnap’’ as claimed, and properly rescued by soldiers, why was he not taken to the Army Base for documentation purposes and debriefing in line with the Standard Operating Procedure in the Nigerian Army?
· Why were the Police Operatives shot at close range even after they had identified themselves as Police Officers on legitimate duty as evident in the video now in circulation? 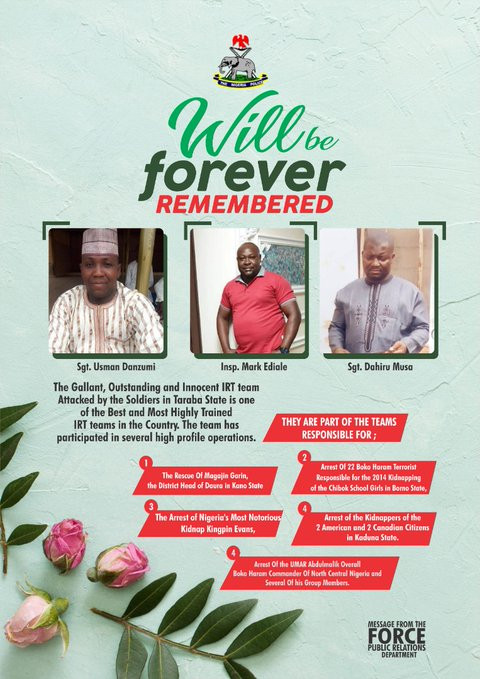 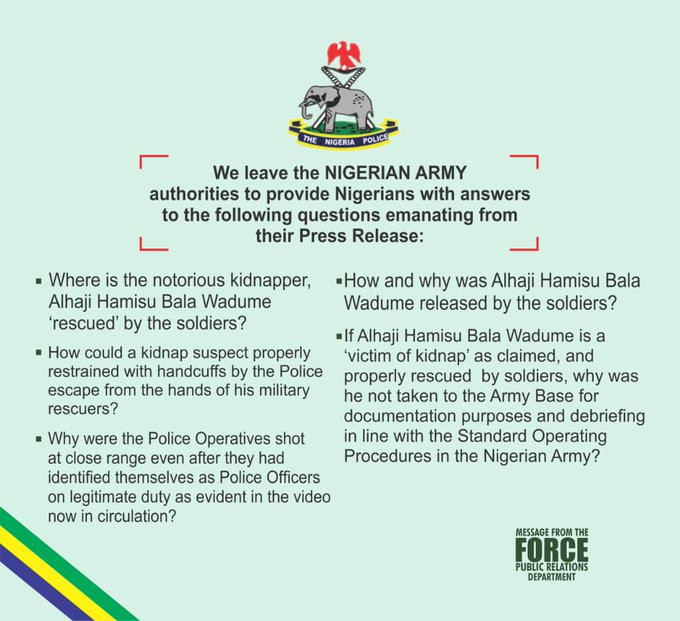