A US-based Nigerian Professor, Moses Ochonu has called out former Governor of Delta State James Ibori and other Nigerian Politicians, for allegedly hiring people to remove their corruption convictions and scandalous past from their online bios and Wikipedia.

According to Prof Ochonu, removal of James Ibori’s corruption conviction and scandals from Wikipedia was uncovered by his friend Roy Boron researching on Nigeria. He revealed that Mr. Roy restored all the corruption conviction information and also found that the reason given in the editing history was that it was “hurting James Ibori on a political and international business level”.

So while we slept (figuratively), this was happening quietly. Nigerian politicians with corruption conviction records and scandalous pasts are hiring people to scrub such convictions and records from their online bios and Wikipedia bio entries.

My colleague and friend, Roy Doron, who researches Nigeria, went to the Wikipedia page of former Delta State Governor, James Onanefe Ibori, and discovered that every information on his corruption conviction and scandals had been removed–edited out.

Anyone can edit Wikipedia entries but they have to provide a reason for doing so, which is then logged in the editing history that anyone can read.

Compatriots, do not let them get away with this self-rehabilitation and self-reinvention. Do not let them rewrite their histories and their bio entries to exclude their scandals and convictions. Such public negative archives are the wages of their sins, the scarlet letter they must carry to their last days.

Since they won’t face any real consequences for their crimes in Nigeria, public shaming via wikipedia and other online bio platforms is their only comeuppance and must be preserved permanently for posterity.

The next time you encounter a Nigerian politician’s wikipedia page, shine your eyes and make sure that what’s there reflects that politician’s record. If not, edit as appropriate to restore removed information. 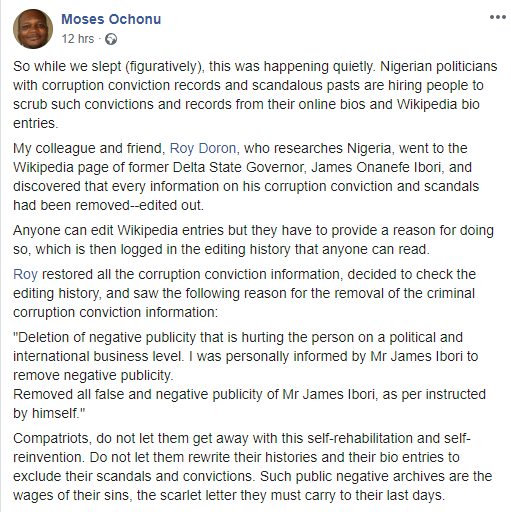 James Ibori’s restored Wikipedia profile reads “a Nigerian politician and convicted money launderer who was Governor of Delta State in Nigeria from 29 May 1999 to 29 May 2007. James Ibori was released from prison in December 2016 after a court order. He served 4 years out of the 13 years he was sentenced to.”