Two men are being hailed as “heroes” after they jumped into the ocean to help prevent a girl in a wheelchair from drowning.

The men were on a cruise ship dock at St. Thomas in the US Virgin Islands when there was commotion. A girl in a wheelchair had fallen into the ocean after her wheelchair rolled off the dock and she was sinking.

The men, whose have now been identified as Kuntry Hamilton and Randolph Donovan, without thinking, raced to save the girl’s life. They jumped into the ocean and got to work.

Someone on the dock threw down a life preserver which the woman desperately held on to while Hamilton and Donovan swam to rescue her. 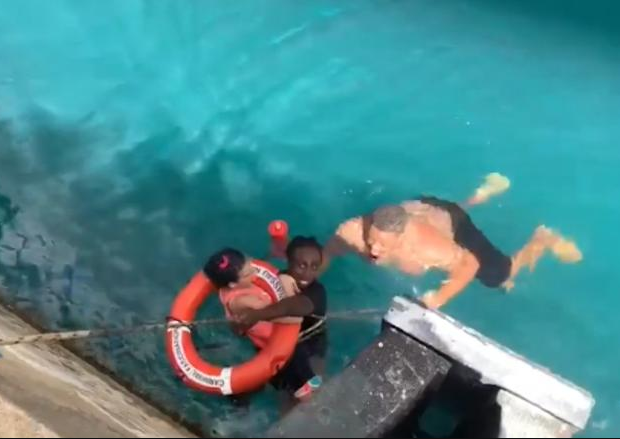 In a video of the rescue, posted on social media, the woman is seen holding the life ring as Hamilton and Donovan hold on to her to keep her afloat. Hamilton and Donovan worked together with rescuers on the dock to use a rope that had been tied around the woman, to pull her out of the water.

The unnamed woman was a passenger on board the Carnival Fascination ship, which had stopped in St. Thomas. After the rescue, her father can be seen hugging one of the rescuers in gratitude.

Speaking to CNN, Hamilton and Donovan said the governor and a legislator applauded their rescue efforts. They also said US Virgin Islands Gov. Albert Bryan, Jr. called them and told them, “On behalf of the people of the Virgin Islands, I want to say thank you.”

In a Facebook post, Sen. Kurt A. Vialet, who represents the area in the legislature, lauded the young men, writing, “Everyday heroes with unassuming personalities live among us!”

Hamilton and Donovan said people recognize them on the streets and say they’re “local heroes.”

Watch the video of the rescue below.