G7 summit: You are ignorant and playing petty politics- Presidency fires back at Kingsley Moghalu

The Presidency has carpeted former Presidential candidate, Kingsley Mogahlu, who recently called out President Buhari over his non-invitation to the G7 summit which held in France from August 24th to 26th.

Moghalu in a series of tweets posted yesterday, lamented that President Buhari was not invited to the G7 summit whereas smaller African economies like Rwanda were honoured with an invitation to meet and rub minds with world leaders.

“It is sad that President Muhammadiu Buhari of Africa’s supposedly largest economy wasn’t invited to the G7 summit in France but Paul Kagame of Rwanda and Cyril Ramaphosa of South Africa were. Our country should be at the table, not on the menu! Obasanjo, like him or not, was at the table’.

The point is that South Africa is virtually always at the table, it is a member of the G20, but Nigeria is not. Why?

“That Nigeria’s standing in the world has declined is a fact that has practical implications for us here at home, and it is also a reflection of our domestic weakness.

“In my view, Nigeria has been in decline for the past decade essentially. It’s just gotten so worse in recent years. So, I am not ascribing this collective reality only to one leader or government.” Moghalu said 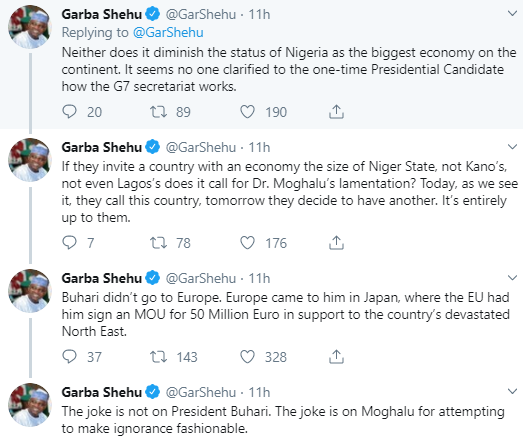 EFCC arrests Kind Thankgod, one other for romance scam in Delta (photos)