Tonto Dikeh’s ex-BFF, Blessing Osom went all out with a shade post against Bobrisky after the cross-dresser’s birthday party was disrupted by armed policemen.

The shade post came just after Bobrisky called out a car dealer, stating that he no longer wants the car he got him for his birthday party. According to him, “there are some people you don’t deal with because they have bad luck.”

“You are wicked, useless and heartless…..anyone that deal with you is in trouble. I don’t need that car you bought for me anymore I want a refund. Guys stay away from dis dude. Their some people you don’t deal cos they have bad luck. you have bad luck and you have cost me a lot” Bobrisky wrote.

However the car dealer lashed out at Bobrisky, revealing that he told his agent to deliver the car to him just for his birthday party even though he’s been tolerating him. He also revealed that they had a written agreement on keeping the car till the cross-dresser makes the full payment.

bobrisky222 please pay your balance and you get you car re-delivered immediately.
.
Have been more than nice in condoling your attitudes and still very nice to tell my agent to go ahead and deliver the car to you just so you can use it for your birthday.
.
My agent had to go to the police station to write series of statements and provide all necessary documents before the car was released to him; as the location it was kept was already sealed up by the police.
.
We had a written agreement and it states that we still have full security hold on the car until all payments has been fully made. Gave you series of discount on this particular car just to support your brand.
.
For the record we’ve delivered cars to over two hundreds Nigerians and it’s always been a very smooth and hassle free transaction.
.
I know you are really tensed right now and am not happy either about what happened about your birthday. I told you i will still send my support whichever way I can.
.
So I don’t really get the part of bad luck! Iet me just assume its anger that made you say all this. Peace and love Bob!

Blessing Osom however waded into the car controversy with a shade. She insinuated that Bobrisky is yet to make full payment for the car, the cake, drinks and food meant for his disrupted party. Tonto Dikeh’s ex-BFF also told Bobrisky to be humble and also talk less since he ”doesn’t have the right connection. ” 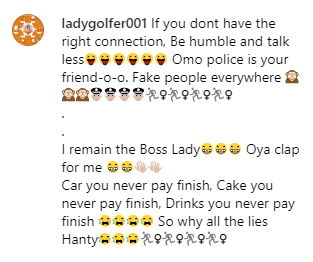 Why is Buhari so scared of his own shadow? – FFK shares his recent encounter with DSS in Anambra State