Impeachment: Donald Trump calls for the immediate resignation of Adam Schiff for reading a ‘wrong’ transcript of his call with Ukrainian president

This morning, President Donald Trump took to Twitter to blast Adam Schiff, who is the head of the House Intelligence committee investigating him in the current Whistle blower story engulfing the White House.

In a series of fresh Tweets this afternoon, President Trump said, ‘Adam Schiff fraudulently read to Congress, with millions of people watching, a version of my conversation with the President of Ukraine that doesn’t exist’.

‘He was supposedly reading the exact transcribed version of the call, but he completely changed the words to make it sound horrible, and me sound guilty. HE WAS DESPERATE AND HE GOT CAUGHT. Adam Schiff therefore lied to Congress and attempted to defraud the American Public. He has been doing this for two years.

I am calling for him to immediately resign from Congress based on this fraud! 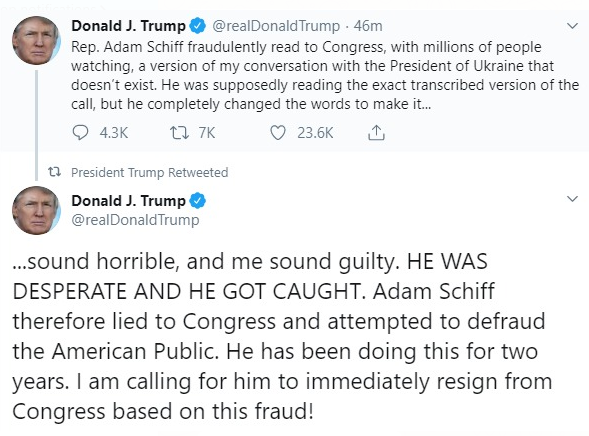 The best investment in life is not buying...

69 were persons killed in #EndSARS protests –...