Breaking News
Zamfara bandits I met not responsible for school...
“We as APC government have failed Nigerians” Dawisu...
Son of notorious bandit leader, three others surrender...
Beware of fake vaccines, Ehanire warns Nigerians
US to release report fingering Saudi prince in...
JUST IN: Policemen flee as hoodlums set station...
LAUTECH reacts after a sex tape of ‘one...
Joe Biden orders military air strikes in Syria...
We are taking loans for Nigeria’s progress, says...
BREAKING: Gunmen abduct over 300 girls in Zamfara...
Home News You must live with the consequences of rejecting Jonathan and putting Buhari in power- FFK reacts to Sowore’s continued detention
News

Femi Fani-Kayode has reacted to the continued detention of Omoyele Sowore, embattled publisher of Sahara Reporters, despite fulfilling his bail condition.

In a post shared on his Facebook page, FFK wondered why anyone is surprised Sowore is still in detention. He pointed out that Sowore is living with the ”consequences of fighting to bring President Buhari to power and rejecting Jonathan during the 2015 elections.”

What amazes me is the utter gullibility of some of our people. Why would you be surprised that Yele Sowore is still in detention? Has Buhari ever obeyed court orders? They did it to those of us in the mainstream opposition over the last 4 years and you applauded them.

Now they are doing it to others and you are lamenting and expressing surprise and disappointment. You never thought it would affect you but now it has. Well this is just the beginning.

You must live with the new reality which is that we are living in a vicious dictatorship which will not spare anyone it feels threatened by.

I and a number of others warned that this would happen in 2015 if Buhari came to power and you laughed us to scorn and insulted us. You fought for Buhari, you rejected Jonathan and you put him in power.

Even if Sowore is released later today or tomorrow they have made their point: that they can do anything they want, to anybody, for any reason and at anytime.

May God deliver us from these wicked souls and I urge every Nigerian to pray for Yele Sowore, Sambo Dasuki and others. 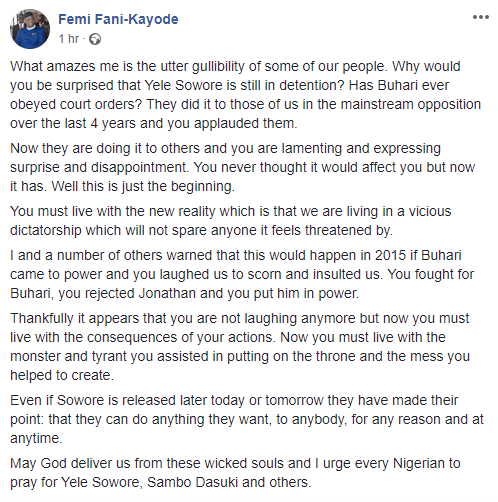 AGF Abubakar Malami fails to defend Buhari’s coup and call for revolution, but justifies charging Sowore with treason and insulting the President