The media mogul paid a visit to the prestigious all men’s historically black college for the 30th anniversary of the Oprah Winfrey Scholars Program. While there, she made a hefty donation to contribute to her scholarship program.

According to a news release from the school, Oprah Winfrey now has the largest endowment ever at Morehouse College in Atlanta after donating $13 million.

The Oprah Winfrey Scholars program started in 1989 and the fund stands at $12 million. Monday’s donation of $13 million pushed her total investment to $25 million.

The Oprah Winfrey Scholars Program has funded the education of about 600 scholars, the school’s release said, including Birmingham, Alabama Mayor Randall Woodfin who was elected in 2017 as the city’s youngest mayor in more than a century.

Addressing a room full of Oprah Winfrey scholars on Monday, Oprah said: “Seeing you young Oprah Winfrey scholars here today has moved me deeply. I am so proud of you, I’m proud of everybody in attendance at this school who is seeking to know more clearly who you are, the value you hold and how you will share that value with the rest of the world.” 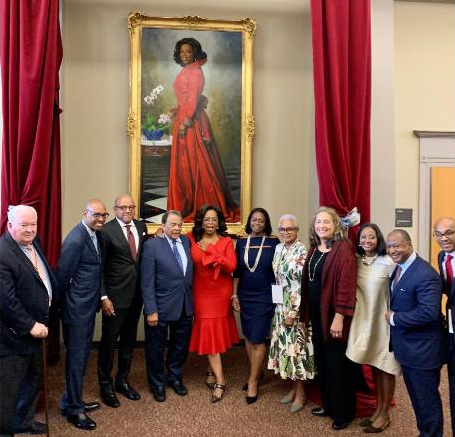 She continued: “I was really surprised to learn that it has been 30 years since I’ve made that $12 million donation to Morehouse, and so today I would like to add $13 million to that.”

Reacting to Oprah’s donation, Morehouse President David A. Thomas said: “I’m grateful to Oprah Winfrey for her generosity. I am also feeling hopeful for Morehouse and what it has garnered in terms of philanthropic support with gifts like Oprah’s and Robert Smith’s. I am hopeful that this will also get others to step up with their support of Morehouse, but even more broadly, historically black colleges and universities.”

Winfrey’s donation comes after billionaire Robert Smith promised to pay off the student loan debt of the 2019 Morehouse graduates in May. Smith donated $34 million to the school last month, making good on his promise.