Flamboyant pastor, Emeka Odumejeje was filmed choreographing with dancers to Peter Okoye’s One More Night during Sunday service in his church.

The controversial prophet was marking his birthday and he had dancers in church to make the day memorable.

However, rather than dance to a Christian song as would be expected, they danced to Peter Okoye and Niniola’s One More Night, a song that talks about sipping Hennessy in the club and getting “down at the back of the club tonight.”

They also did the song’s signature dance during their performance on the pulpit, in addition to a bit of Zanku and Leg Work dance.

Asides the dance, money was also made to rain as members sprayed the pastor with new notes while he danced. 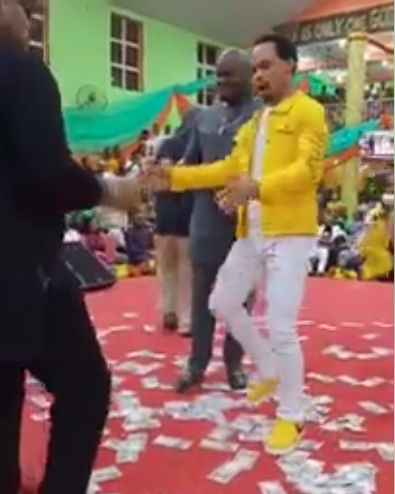 This is no different from his birthday last year when there was controversy on his birthday because of how money was sprayed on him on the pulpit.

Watch his latest birthday video below.

My father is not arranging a second wife for President Buhari- Mamman Daura’s daughter speaks, says she recorded viral video of Aisha Buhari shouting in the villa