Super Eagles Head coach, Gernot Rohr has warned Nigerian not to underrate Benin when his side face the West African team today in the AFCON 2021 qualifying match.

Rohr, whose side boasts very young and pacy players, coached the Super Eagles to impressive results against Ukraine and Brazil last month, but has warned Nigerians not to take the very defensive-minded Benin for granted, as they are a threat on the counter when they decide to sit back and defend.

Rohr speaking to reporters during the pre-match press conference in Uyo, said : ”We try always to bring the best team, our two games you spoke about were very difficult games against great teams but not African teams, the football was different and the two teams played very offensively so we had space and we need that in our team for our quick wingers and strikers, we enjoy it. 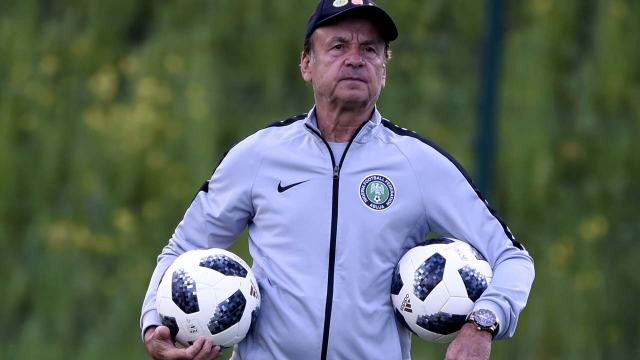 ”It will not be the same game perhaps tomorrow because Benin Republic as a team play well defensively, you saw them play in the AFCON competition, they did so well, they eliminated Morocco for example and it will be different.

”Our two games were good games but it is dangerous to believe now we played well in these two games it will be easy against Benin, it will be more difficult because it is a different team, different football and we only have one day but it’s the same for them.

”When you play at home, you leave some complicity in your play so I hope that with one training session, everybody together,  we will be able to have a good performance.

”If we play well, with our quality, nice pitch, we did not go there yesterday with our 14 players for the training, I hope the pitch will be good to play good football like we did in the last two games but in a different way because African football is not the same”.

There’s been a lot of talk about Rohr’s late substitutions in matches and he explained his reasons for not making changes till the dying minutes of matches.

The Franco-German tactician explained : ”I prefer to wait to be sure to make good replacements than to go quickly.

”I let the players the chance to show themselves, I have confidence in the team starting the game and then to bring somebody out if there is no injury.

”I must be sure that we have better possibilities to be stronger without the people starting the game but I think we changed six players in Singapore, it was the maximum.

”In Ukraine also, we saw a lot of people, now we have the chance to have two games which means that we can see a lot of players also.

”The players are happy when they play but we are 23, we can only play 14 in official games. Like you see the spirit in the team is good and they admit some other players can start in their place.”