R.Kelly’s girlfriend Azriel Clary has spoken out about having to spend Thanksgiving without him. She went on to throw shade at his other girlfriend, Jocelyn Savage for recently speaking out against the singer.

Azriel Clary took to Twitter to write: “I must say celebrating my first holiday without Robert has been a terrible feeling that I would not wish on anyone. Whether you despise him or love him I am not just any girlfriend of his, and I refuse to do any and every interview for a check.”

She added: “I have integrity and when I do speak it will be on a great platform that can humanize him. I want to make the situation better not worse, and rushing to speak just to appease everyone else is not a how I want to portray him. Patience is key guys.” 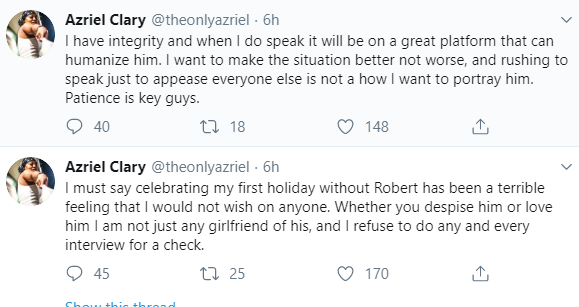 This comes after Jocelyn Savage, who has been defending R.Kelly, suddenly spoke up against him

Anybody that says this is make up, we...

Cardi B asks to be taken to the...