On Monday December 2nd, Singer, Festus Keyamo posted a tweet in support of the Social media regulation bill being debated upon in the Senate.

In Keyamo’s opinion, people who are against the bill should first unblock anyone they have blocked on social media, for insulting them online. He wrote;

Those so-called overnight Social Media ‘activists’ who oppose the Social Media Bill should first stop blocking those who irritate them with insults, unblock all those they have blocked and apologise to them. You can’t be intolerant and ask others to be. Practice what you preach.

Rapper, M.I Abaga took out time to reply Festus Keyamo, pointing out why his position on the controversial bill doesn’t hold water.

I’m sure you can see the difference esteemed sir. Blocking people (which is so much fun by the way) doesn’t infringe on the other persons right to say what they want to say.. I don’t have to listen to you isn’t the same as I won’t allow you speak . he wrote 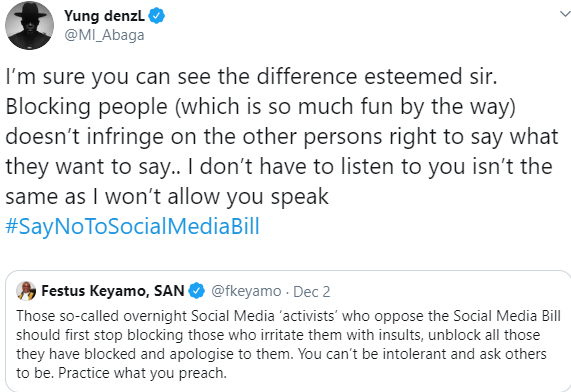 We lack the power to prosecute electoral offenders — INEC