President Donald Trump has been impeached by the House of Representatives.

For the third time in the nation’s history, the House of Representatives voted to impeach a sitting president after a daylong debate.

Trump was impeached following more than a week-long investigation into the president’s dealings in Ukraine.

The House officially voted on Wednesday evening in favor of two articles of impeachment, making Trump the third president in U.S. history to be officially impeached. 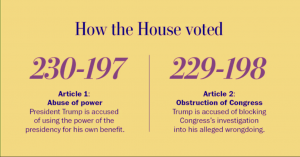 President Trump was accused of pressuring Ukraine to dig up damaging information on one of his main Democratic challengers for the presidency in 2020, Joe Biden, and his son Hunter.

According to report, Hunter was said to have worked for a Ukrainian company when Joe Biden was US vice-president.

Trump was accused of dangling two things as bargaining chips to Ukraine – withholding $400m of military aid to Ukraine that had already been allocated by Congress, and a White House meeting for Ukraine’s president.

This, Democrats say, amounts to an abuse of presidential power, using the office for personal political gain and to the detriment of national security. He was accused of obstructing Congress by refusing to co-operate with the congressional inquiry.

However, the first stage is done now – two articles of impeachment (charges) were brought to the House of Representatives and passed in a vote along party lines.

The Senate is expected to begin its own trial process in January.

If this process is completed and the Senate convicts trump, the line of succession for the US government, as established by the Presidential Succession Act of 1947, would mean Vice-President Mike Pence moving into the Oval Office as the new president.

‘I was never summoned by the Federal High Court over Sowore’s continued detention’ – Minister of Justice, Abubakar Malami