Breaking News
Sanwo-Olu declares 24-hour curfew in Lagos
Pro-SARS supporter caught on tape admitting he was...
FCT security agents, thugs attack protesters, Lagos, others...
Be prepared to pay for damages caused as...
Austin Eguavoen to be appointed manager of top...
Ooni, Obasanjo meet over #EndSARS agitation
You have made your point, allow government to...
Lagos state government shuts down schools over #ENDSARS...
Soldiers take over scene of planned #EndSARS protest...
#EndSARS: Join the movement for a better Nigeria...
Home Entertainment 35-years after, Eddie Murphy returns to ‘Saturday Night Live’, and gives the show its best TV rating since May 2017
Entertainment

35-years after, Eddie Murphy returns to ‘Saturday Night Live’, and gives the show its best TV rating since May 2017

Eddie returned as a special guest host and brought back some of his most memorable characters. He also had some special guests on the show including Chris Rock, Tracy Morgan, Dave Chappelle and more. 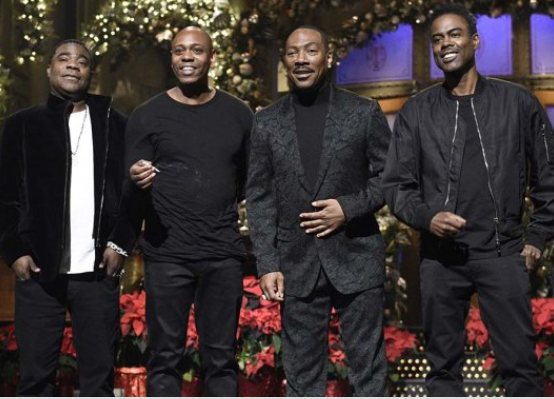 Eddie Murphy’s return to Saturday Night Live also delivered in the ratings, as the show drew its biggest numbers in two-and-a-half years.

The December 21st episode of the variety sketch series, with host Murphy and musical guest Lizzo, averaged a 2.5 rating in adults 18-49 and 9.921 million viewers overall, according to live-plus-same-day “fast official” ratings from Nielsen Media Research.

The episode currently ranks as the highest-scoring and most-viewed episode of SNL since May 2017.