Bill Cosby writes Snoop Dogg from prison; thanks him for his post calling out Gayle King and Oprah Winfrey for “tarnishing the legacy of Black men”

Bill Cosby wrote an Instagram post from prison to thank Snoop Dogg for calling out Oprah Winfrey and Gayle King for doing interviews that “tarnish the image and legacy of Black men.”

The incarcerated comedian claimed Black women are being used to destroy Black men’s legacy and he thanked Snoop Dogg after the rapper ended a post attacking Oprah Winfrey and Gayle King with “Free Bill Cosby.”

Earlier, Snoop Dogg posted a photo of Winfrey standing next to Harvey Weinstein along with a message reading “Did that fake ass micheal Jackson s— to tarnish his name with them lying ass kids and here she is with a known rapist smiling and laughing. F*** u and Gayle. Free bill Cosby.”

Snoop Dogg’s post came the morning after the interview between CBS morning anchor Gayle King and WNBA legend Lisa Leslie was broadcast. During the interview, King asked Leslie about the legacy of Kobe Bryant. She also brought up the 2003 rape accusation against him.

The interview led to a backlash and Gayle later released a video to explain.

She stated, “Unbeknownst to me, my network put up a clip from a very wide-ranging interview, totally taken out of context and when you see it that way, it’s very jarring.”

Reacting from jail, Bill Cosby – who is serving 3-10 years in prison after being convicted of sexual assault in 2018 – addressed the issue of Oprah and Gayle granting interviews that implicate Black men while they do not do same for their White friends accused of the same crime. He didn’t mention Oprah and Gayle’s name though.

He wrote to Snoop: “Snoop – when they brought me to my gated community and placed me inside of my penthouse, they didn’t win nor did they silence me. It’s so sad and disappointing that successful Black Women are being used to tarnish the image and legacy of successful Black Men, even in death. Are these people that in need of fame, ratings and/or money? On behalf of myself, Camille and my family, thank you, thank you and thank you. My heartfelt prayers are with Kobe and his family, as well as with Michael Jackson and his family. May their legacies live on forever.”

He added the hashtags: 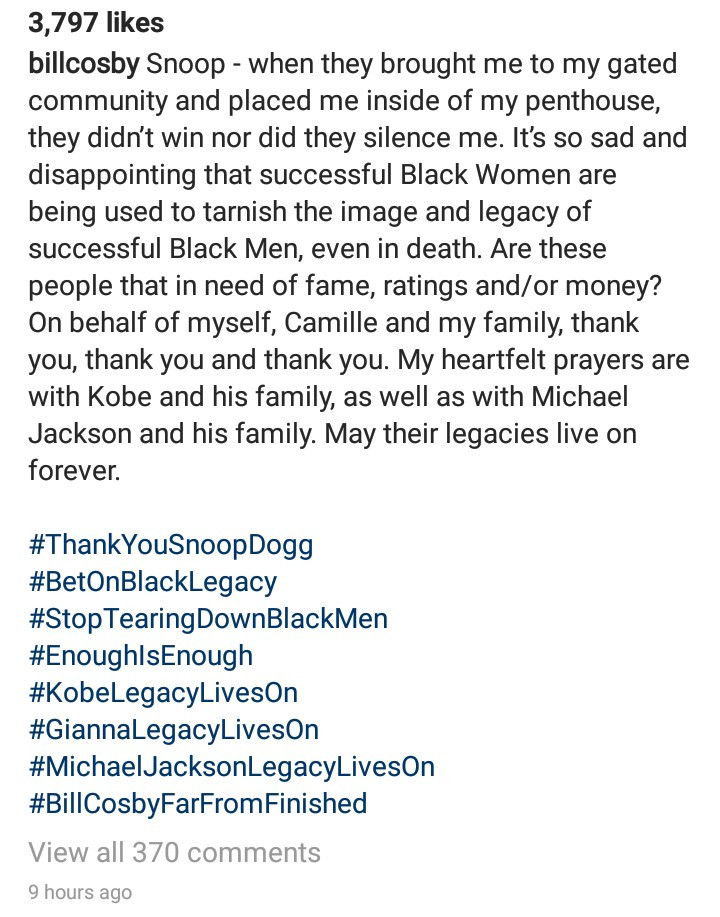