Femi Fani-Kayode has responded again to the allegation made by Rotimi Amaechi nearly 3 years ago that he embezzled 2 billion Naira when he was the Minister of Aviation.

Rotimi Amaechi made the allegation during an interview on Channels TV in May 2017. He said during the interview that FFK ran away with N2 billion given to him by the Rivers State government to fix a deplorable Port Harcourt Airport runway.

Amaechi alleged that former Rivers State Governor, Peter Odili (who was the governor from 1999 to 2007) handed the money to Fani-Kayode.

Amaechi said to the Channels TV host at the time: “Those who shared in the corruption are busy dancing about it. Fani-Kayode, when he was Minister of Aviation, Dr. Peter Odili’s government gave him N2 billion to fix the runway.

“It’s not there in the records of Aviation. I’m the minister of Transportation, I have that record. It’s not there.

“He went away with the N2 billion. These are statements of fact.

“The runway was closed for two years and Fani-Kayode left with the money. Is that the kind of character I will speak to? We are not on the same level.”

Though the interview was done in 2017 and Femi Fani-Kayode reacted to it at the time, he was forced to react again after the video went viral this weekend with many publications claiming the allegation is recent.

Femi Fani-Kayode took to Twitter to reveal that the video is an old one. He shared the old video where Rotimi Amaechi made the allegation and another of him (FFK) responding to the allegation.

He then responded again by stating that the airport was re-built and fully paid for by him when he was Minister of Aviation.

He tweeted: “The runway at Port Harcourt Int. Airport was re-built & fully paid for by me when I was Min. of Aviation. If anyone has any doubts about that they should ask Julius Berger who were the contractors. The runway was commissioned & airport opened shortly after we left office. 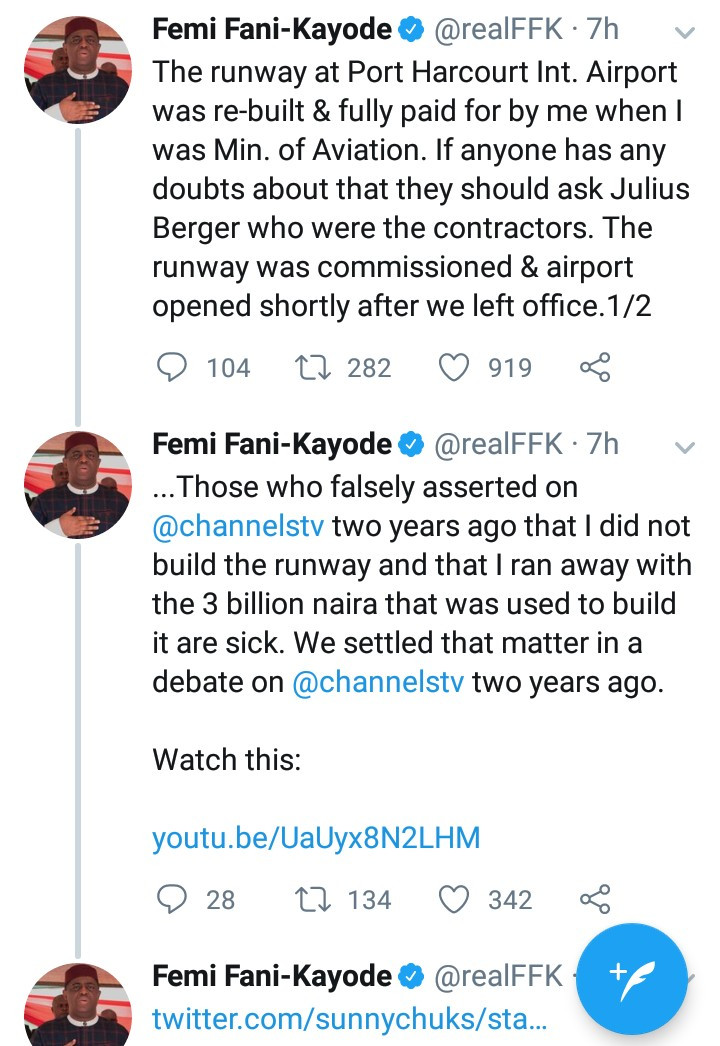 Below are the videos shared by Femi Fani- Kayode. One is of Amaechi’s interview and the other is the reply FFK gave to the interview years ago.