Former Aviation Minister, Femi Fani-Kayode, has kicked against suggestions that members of the Myetti Allah Cattle Breeders Association of Nigeria (MACBAN) should be recruited into the new security outfit created by South West governors, Amotekun.

Alhaji Yaqub Bello, a former Chairman of MACBAN in the state, made the suggestion on Monday February 24th during a public hearing on the Oyo State Security Network Agency Bill, 2020, also known as Amotekun bill.  While declaring his support for the new security outfit, Bello said

“Some of us have been in Oyo state for over 40 years, cohabiting with the natives, married Yoruba women and have children.  So, our request is to include Myetti Allah as members of Operation Amotekun to enhance the job of the outfit, since we know the terrain of where we rear our cattle.

Having Fulani among the outfit will make it easier for Amotekun men to distinguish between genuine herdsmen and the criminals while on patrol.  A Fulani man can also serve as an interpreter while interrogating any suspected herdsman.”

FFK is of the opinion that this will not work. Taking to Twitter to air his objection, he wrote 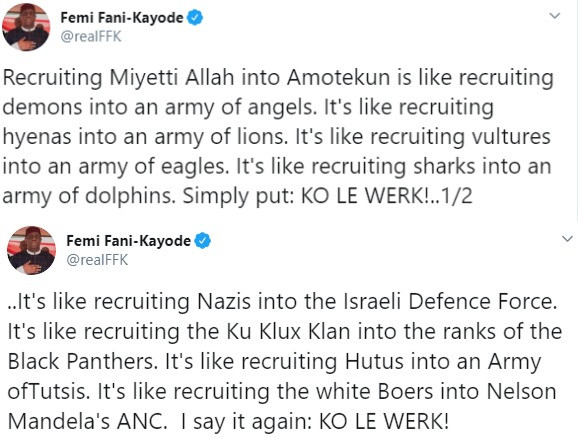 Prince Harry now wants everyone to call him ‘Harry’ henceforth