Premium Times accuses DSS of trailing its reporters over report about ‘rift’ between NSA Babagana Monguno and Buhari’s chief of staff, Abba Kyari

The management of Premium Times has accused the Department of State Services (DSS) of trailing its reporters after report of a “rift” between national security adviser (NSA) Babagana Moguno and chief of staff to President Muhammadu Buhari, Abba Kyari.

Recall that the online newpaper shared a report in which it released some documents which backed its claim of Monguno accusing Kyari of “dangerously” interfering on matters bordering on national security.

In a statement released on Sunday, Premium Times alleged that Samuel Ogundipe (pictured below), the reporter who shared the story suffered a continous hacking attempt and also received many calls on confirming his identity. 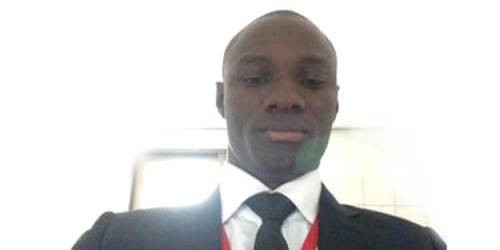 It also alleged that the home of its editor-in-chief, Musikilu Mojeed was breached by two men suspected to be officials of the Department of State Services (DSS). They reportedly claimed they had a message for him.

The suspected DSS operatives left after Mojeed’s wife told them she wanted to call her husband to confirm if he was expecting a parcel.

Some suspected operatives of Secret Police were also accused of surveilling Ogundipe’s house and leaving after confirming there was activity in his house.

“In an age of widespread kidnapping it adds no value to the image of security officials to play by the protocols of nefarious actors in the community, visiting the homes of citizens and making up stories about dropping messages for them or threatening them through anonymous calls.

“If the security forces want any of our staff, we would be happy to present them in a way that will ensure clear accountability.”

A Premium Times reporter, Nicholas Ibekwe also corroborated the claim. He alleged that the DSS forced Samuel Ogundipe underground with an alleged attempt to arrest him.

So men of the SSS have forced my colleague @SamuelOgundipe underground. Now they are trying to breach the security of house my Editor-in-Chief as well. Because of Samuel’s story exposing the rift between NSA and Buhari’s Chief of Staff, Abba Kyari

Samuel has been receiving death threats and threatening calls from people suspected to be officials of Nigeria’s Defence Headquarters since the story was published.

Attempts were made to breach Samuel’s iCloud, his social media handles and email. These attempts have been traced to government-owned properties.

But if officials of this government think we be can cajoled into silence, they have another think coming. 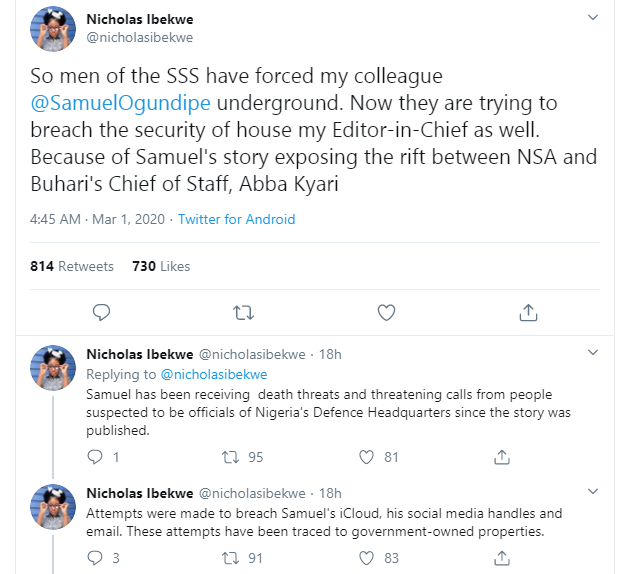 The DSS however denied the allegation and also insisted that there is no operation targeted at Premium Times.

“The report that the DSS is laying siege on Premium Times and has hacked the phones of one of its staff is false in its entirety. It is unfounded and just a needless sensationalism.

“There is no such operation at the moment by the Service targeted at the Premium Times, its Editor or staff. If there is any need for the DSS to discharge its duty, it sure has to do that with every sense of decency and in accordance with laid down procedures.

“Now, the Service is not anywhere near the news agency. Therefore, the report should be disregarded. It is fake news.“