Femi Fani-Kayode, a former Minister of Aviation, has stated that there’s something “fishy” about the report of an Italian man been diagnosed with Coronavirus in Lagos.

FFK in a twitter thread, said something doesn’t add up in several reports about the case.

”The Italian that brought coronavirus into Nigeria has not been named & his picture has not been released to the public.The driver that was alleged to have driven him to Abeokuta said he did not do so.The passengers on the plane in which he flew into Nigeria cannot be traced.

The claim that he was an employee of a company & that he went to their office in Lagos after leaving the airport has proved to be false. Finally the Lagos state Comm. of Health went to see the Italian without wearing any protective gear. Something doesn’t add up in this saga”  he wrote 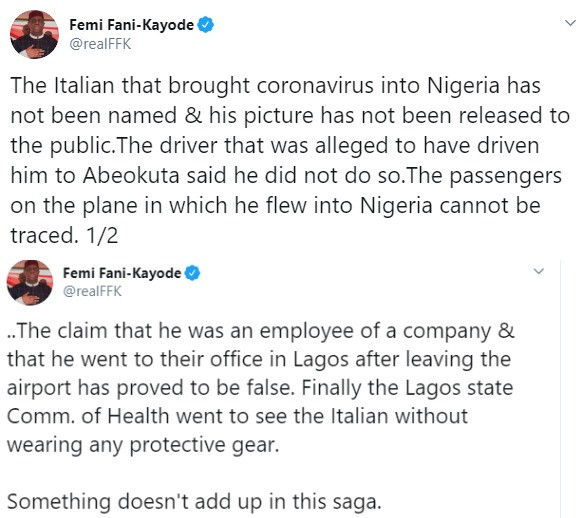 Nigeria has 1 doctor to 2,753 patients – Ministry of Health

Amotekun set for take off