Martins slumped after colliding with a Katsina United player on Sunday, March 8, 2020. He was rushed to Dalhatu- Araf Specialist Hospital in Lafia where he was pronounced dead (read here).

Reacting to his death, the NFF condoled with his family and revealed that they have reviewed the situation in conjunction with the Ministry of Sports and the League Management Committee (LMC).

The NFF added that no further match will be played except there is “full compliment of the medical equipment and personnel as provided in the NFF Club Licensing Regulations.”

Read the full statement by the NFF below.

The Nigeria Football Federation (NFF) regrets the incidence in Lafia involving a player of Nasarawa United and further condole the immediate family of the late player and the football Stakeholders at large.

The NFF has in conjunction with the Ministry of Sports engaged the LMC and reviewed the situation. As an immediate first step, the NFF has directed that no further match be played except there is full compliment of the medical equipments and personnel as provided in the NFF Club Licensing Regulations.

All Match Commissioners and the host FA are to ensure they inspect all the facilities including carrying out test runs before giving go-ahead for any match to be played. 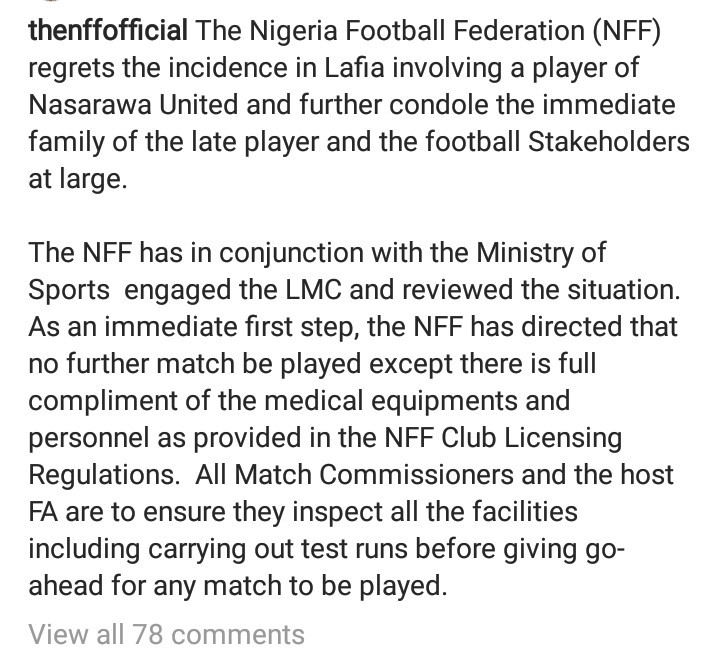