We do not want to be slapped – Kate Henshaw calls out AGN President, Emeka Rollas after Senator Abbo is made a patron

Nollywood actress, Kate Henshaw has also called out the President of Actors Guild of Nigeria (AGN) Emeka Rollas over the enlistment of Senator Elisha Abbo as a patron of the association.

In her tweet, the veteran actress stated that the Adamawa lawmaker who was spotted in a video months ago assaulting a nursing mother in a sex toy shop’, is not worthy to be a patron of AGN.

Kate Henshaw added that there are women in the guild and they don’t want to be slapped. She tweeted;

Emeka Rollas, I cannot find your handle on Twitter, my name is Kate Henshaw and I do not mince words when I say @AbboElisha is NOT worthy to be a patron of the Actors Guild of Nigeria. We have women in this guild and we do not want to be slapped!! 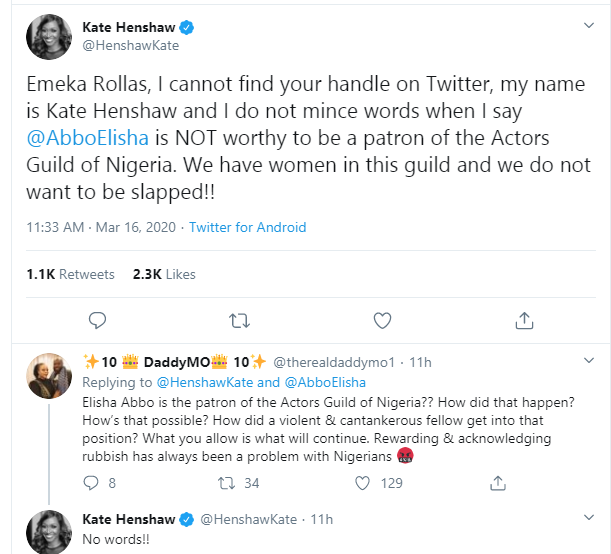 This is coming after veteran actress, Hilda Dokubo spoke up against the enlistment of Senator Abbo as a patron of AGN