Kate Henshaw has hit back at AGN President Emeka Rollas Ejezie after he said in a TV interview that she and Hilda Dokubo are probably not members of the AGN, as he defended his decision to make senator Elisha Abbo the patron of AGN months after he slapped a nursing mother in a sex toy shop.

After it was announced that Elisha Abbo was made the patron of the Actors’ Guild of Nigeria, Hilda Dokubo released a video questioning the decision of the AGN President, Emeka Rollas .

She asked why Rollas will enlist Abbo as the Patron of the AGN in spite of his reputation.

Kate Henshaw also reacted. She told Rollas that the women in the guild ”do not want to be slapped and that Abbo is no role model” .

In a recent interview with Plus TV, Rollas responded to their criticisms by stating that there’s no man without a past. He said Abbo was not convicted of any crime and that he has apologised for being abusive. He added that the victim did not reject the apology

He went on to say that those calling him out for his decision (Kate Henshaw and Hilda Dokubo) are probably not registered members of the Actors Guild of Nigeria.

Well, Kate has now reacted to that. She shared screenshots of a mail Emeka Rollas sent to her less than a month ago, telling her that the AGN is nominating her as “Veteran Actor of Nigeria.”

The mail reads: “It is my pleasure to inform you that the Board of Trustees and entire members of AGN have found you worthy and very deserving of this ‘Veteran Actor of Nigeria’ (VAN) Award.”

It continues: “We will officially decorate you with the medal of honor.”

Kate asked Rollas how he can claim that she is not a member of AGN yet he sent her the mail below.” 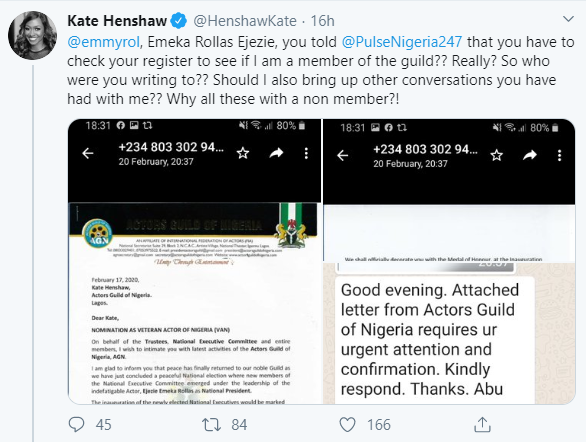 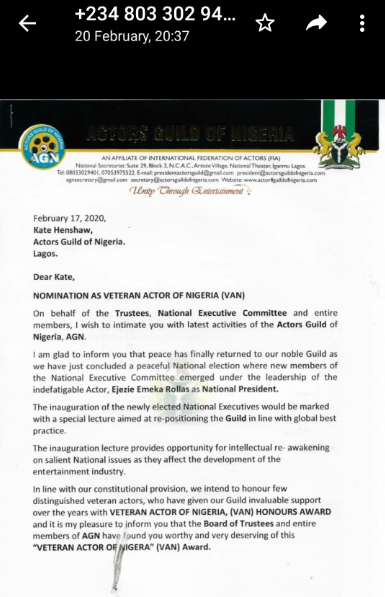 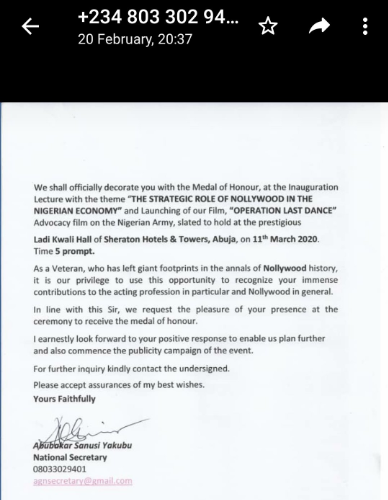 She pointed out to him that he is not a president unto himself, therefore, he cannot appoint a patron whom other members of the AGN do not approve of.

She went on to state that Elisha Abbo’s assault case is still in court and that he has not been acquitted. She added that if Rollas had done his research he would know this.

In the 7-minute video, Kate narrated what happened after she found out Elisha Abbo had been enlisted as the patron of AGN, how she reached out to Emeka Rollas to discuss it, and his response to her.

She added in the caption: “#NoToElishaAbboAsAGNPatron I do not need a crowd to speak up about the things that matter…. You are NOT a “president” unto yourself. I abhor people who speak out of both sides of their mouth.. Be guided on this macabre dance that you have undertaken. They are clapping for you…..keep dancing…”

Her comment on the matter earned her praises from her colleagues. 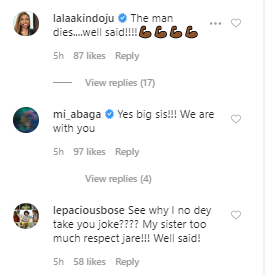 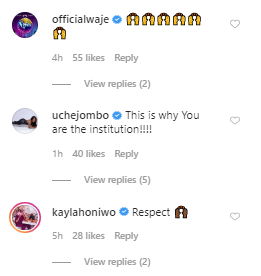 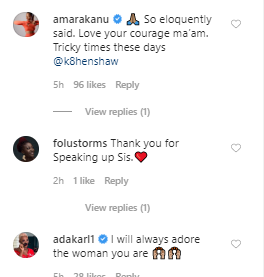 Below is the video of the actress addressing Emeka Rollas.

I do not need a crowd to speak up about the things that matter…. You are NOT a "president" unto yourself. I abhor people who speak out of both sides of their mouth.. Be guided on this macabre dance that you have undertaken. They are clapping for you…..keep dancing…