Heanor Mayor, Sheila Oakes has been expelled from the Labour party after making shocking comments about Boris Johnson’s health

Sheila Oakes, who is mayor of Heanor in Derbyshire and a Labour district councillor, posted the insensitive comment on Facebook on Monday night.

Replying to a message calling for people to say a prayer for the Prime Minister, Cllr Oakes wrote on Facebook: ‘Sorry, he completely deserves this and he is one of the worst PMs we’ve ever had.’ 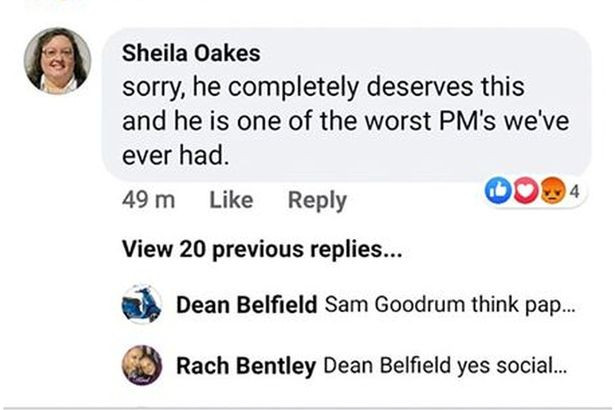 Following outrage over her post, Labour leader of Amber Valley District Council, Chris Emmas-Williams, has said the party had withdrawn Ms Oakes from the party.

In a statement, he said he is ‘appalled and very disappointed’ by her behaviour, adding she had apologised to him personally, on Facebook and BBC Radio Derby.

‘‘As leader of the Council and Labour Group I am appalled and very disappointed by the comments posted on Facebook by Cllr Sheila Oakes.

‘There is no place in politics for personal and hurtful comments no matter how angry you are. ‘I asked Cllr Oakes to remove the comments and apologise immediately after it was brought to my attention. ‘In no circumstances can I or the Labour Group condone this sort of behaviour, it is not in being with the standards expected in public life or office. ‘A full investigation will take place and appropriate action will be taken in line with the Labour Party rules and regulations.’

‘Cllr Oakes does not currently sit as a Labour councillor’.

‘We wish the Prime Minister, and all who are suffering this awful disease, a speedy recovery and send love and solidarity to them and their families. ‘It would be inappropriate to comment further until due process has taken its course.”