“Who is fooling who?” Reno Omokri says it’s “very fishy” that the Account General’s office burnt a day after the PDP called for an audit

Reno Omokri has said that there is something “very fishy” about the fire that gutted the office of the Accountant General of the Federation.

The office located in the Federal Capital Territory, Abuja, was gutted by fire this morning Wednesday, April 8th. The fire, reportedly caused by a spark from an air conditioner, affected two key departments including the one that processes consolidated revenue sharing amongst the three tiers of government

Former presidential aide, Reno Omokri reacted to the fire by asking some questions while stating that the fire was “very fishy”.

He wrote: “The fire in the Accountant General’s office started a day after the PDP called for an audit into the so called subsidy regime that General Buhari’s government claims to have spent over ?2 trillion on? There is a #Coronavirus lockdown in Abuja and the Accountant General’s office burnt down? This is an office that did not burn when it was a beehive of activities, only to burn when it became a ghost town? Who is fooling who? What are the odds? An accident? Very fishy!” 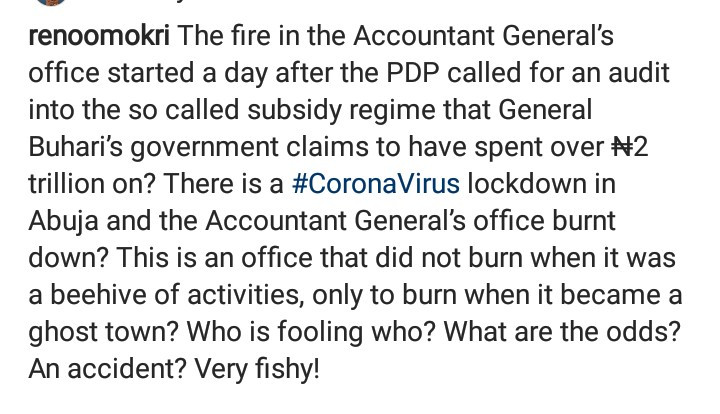