Professor Akin Abayomi, the Commissioner for Health in Lagos state, has debunked reports claiming he has tested positive for the novel Coronavirus.

Recall that on Thursday May 7, he announced via his Twitter handle that 10 associates of the Lagos State House in Marina had tested positive for the virus. Some reports claimed he was one of the 10.

However in a disclaimer posted on his Twitter handle on Friday morning, Professor Abayomi described the reports as fake news.

”I hereby implore the general public to disregard the fake and misleading news circulating in the media to the effect that I have tested positive to #COVID19 infection.

It is evident that the fake news is calculated at causing panic and unnecessary anxiety amongst the populace.

I therefore urge the public to disregard any news on #COVID19 that does not emanate from @followslasg official communication channels and other verifiable sources.”he tweeted 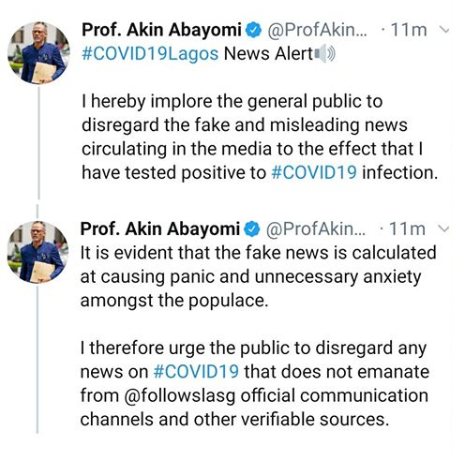