US president, Donald Trump, has reacted to a video of him snubbing reporters after a Chinese-American reporter asked him why he always talked about America leading other nations in Coronavirus testing while Americans were dying daily.

In the  press briefing which happened on Monday, Trump told a Chinese-American reporter to ask China why Coronavirus has spread and is killing people all over the world.

The lady felt offended that she was being asked that question because of her Asian roots, and kept asking Trump to explain why he said what he said.

Trump then walked out of the press briefing when he noticed that another reporter he called upon, didn’t ask any question immediately but deferred to the Asian reporter who Trump had clashed with.

Trump on Tuesday morning, replied a tweet showing the video where he snubbed reporters and then walked out of the podium, He tweeted;

‘The Lamestream Media is truly out of control. Look how they work (conspire!) together. They are the Enemy of the People, but don’t worry, we will WIN in November!’ 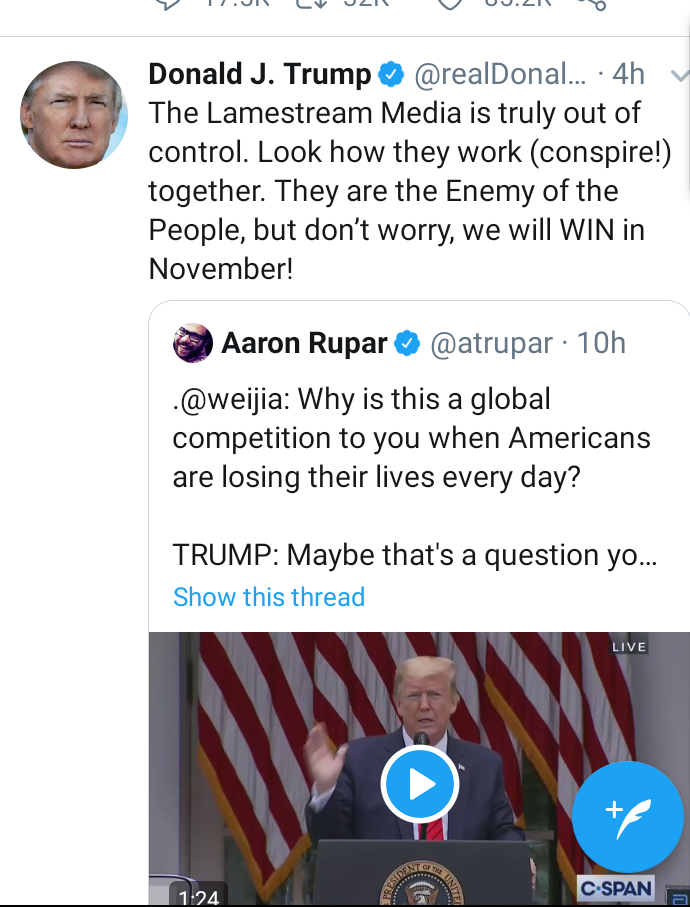 Coronavirus has killed over 80,000 people in the US as at Tuesday morning, making the US the worst hit Nation according to official figures.

Trump has been criticized for his handling of the pandemic, but in defence has shifted the blame of the disease spread to China and has said he will punish China with economic sanctions over the pandemic.

The US presidential election is set to hold this November and Trump doesn’t want a crippled economy to last on till then as the economy has been his election selling point since he took office in 2016.

Pastor, Imam and 27 others arrested for violating lockdown order in Lagos