Muslims in Kano,  Katsina, Borno,  Zamfara and Bauchi states on Sunday shunned a directive of the Sultan of Sokoto, Alhaji  Sa’ad Abubakar, and the Presidential Task Force on COVID-19, which stated that there should be no large gatherings at Eid prayers.

Our correspondents, who monitored prayer grounds in the states, observed that there were  massive gatherings with the majority of the faithful  not observing the PTF’s protocols such as social distancing and wearing of face masks.

Recall that states, including Kano, Katsina, Borno and Yobe,  last week relaxed the Federal Government’s lockdown and  allowed religious organisations to hold their congregational activities. They gave  Muslims the go-ahead to hold prayers at Eid  at  grounds to mark the end of 30 days fasting.

But  the  Nigeria Supreme Council for Islamic Affairs,  led by the Sultan,  on Wednesday contradicted the state governments.

In a statement  by its Deputy Secretary General, Prof Salisu Shehu,  the NSCIA said massive gatherings at one Eid ground in a big city should be avoided. “Rather the Eid could be performed in area mosques to avoid unmanageable crowds,”  it stated.

In a statement  by its Secretary General, Dr Khalid Abubakar, the JNI said, “Eid-el-Fitr congregation on the outskirts of towns and cities should be temporarily suspended.”

It also directed that “Eid-el-Fitr prayer be observed at home with family members or alone in case there isn’t anyone with him or her, at home.” 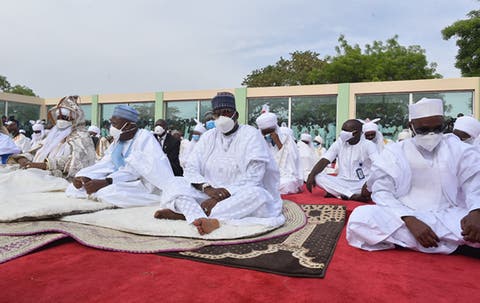 At the press briefing of the PTF on Thursday, its Chairman, Mr Boss Mustapha,  advised against large gatherings of people during the Sallah celebration.

In Kano State, The PUNCH’s correspondents reported that Muslim faithful  trooped out  as early as 8:30am to observe the   Eid-el-Fitr prayers at the various Eid praying grounds without complying with the physical distancing order.

It was observed at some Eid grounds that while some worshippers wore face masks, others refused to abide by the order.

However,  worshippers were asked  to wash their  hands and use of sanitisers by the people mandated to enforce  hygiene rules.

But some worshippers entered the prayer grounds without washing their hands and  using sanitisers.

Some Muslim leaders in the state commended Ganduje for allowing Muslims to observe the Eid prayer despite the Federal Government’s directive.

Some of the Muslims leaders, who spoke to The PUNCH, in separate interviews, argued that the permission granted to Muslims by Ganduje  was an opportunity for them to pray to God to end the pandemic.

The  Chief Imam of Sasif  Friday Mosque in the Gama area in the Kano metropolis, Sheikh Mohammed  Yahya, said their decision to observe the Eid prayers despite the danger was borne out of the fact that Eid ground was  one of the places where prayers could be answered.

Another Muslim leader, Sheik Abubakar Umar, said their decision to obey the state government order was informed by the fact that Muslims could use the occasion to seek God’s intervention.

In Katsina State,  Muslims also observed prayers at Eid grounds to mark the end of 30 days fasting.  Many of those who thronged the prayer grounds did not observe social distancing neither did they wear face masks.

The Emir of Katsina, Dr Abdulmumini Usman, was at the Kofar Guga Eid prayer ground where he and many Muslims in Katsina observed  prayers to mark the end of  fasting.

The Eid prayer attended by the Borno State Governor, Prof Babagana Zulum, was held at the Ramat Square.

Although efforts were made to maintain social distancing, it was difficult to implement in areas where there were no government officials because of the crowd that thronged the prayer ground.

In Bauchi State, the directive of the PTF and the Sultan  was ignored as residents failed to observe social distancing at Eid prayers.

The state Governor, Bala Mohammed, religious and traditional leaders had, at a meeting in Bauchi last week,  agreed that religious gatherings should resume in the state.

One of our correspondents observed that the Eid-el-Fitr prayers were not held at prayer grounds, but at Juma’at mosques.

But at the Bauchi Central Mosque, where Mohammed, top government officials, the Emir of Bauchi, Alhaji Suleiman Adamu and other  traditional chiefs in the Emirate prayed, there were thousands who participated in the prayer.

In the mosque, it was noticed  that only the prominent personalities observed social distancing and wore face masks.

But the situation was quite different outside the mosque. The PUNCH observed that social distancing was not observed by the worshippers outside. The  majority of them did not wear face masks and observed other protocols set by the PTF.

Some of them after the prayers, shook hands and exchanged pleasantries with friends and loved ones.

In Zamfara State,  prayers were performed mostly at Juma’at mosques and prayer grounds.

The issue of face masks was completely neglected, as only very few people were seen wearing them

Many people interviewed by The PUNCH expressed happiness with the action taken by the state governor to ease the lockdown as against the Federal Government directive of “stay at home.”

In Sokoto State, Muslims   prayed  at Juma’at mosques instead of prayer grounds.

Except for top government officials and traditional rulers, many of those who were at the mosques did not wear face masks. Also, there was no adherence to social distancing in the well-attended prayers at the mosques.

The Sultan was among dignitaries that prayed at the Sultan Bello Juma’at mosque.

In Kwara State, Muslims  complied with the PTF and the Sultan’s directive, as they held Eid-Fitr prayers in their various homes.

The Muslims including the Emir of Ilorin, Alhaji Ibrahim Sulu-Gambari, gathered in small groups in their compounds to observe the two rakat prayers.

In Ekiti State, there were no Eid prayers at prayer grounds to mark the end of the Ramaddan fasting.

A Muslim, Hajia Monsurat Adewumi, said she and others prayed in their different homes.

Also, Muslims in Ogun State   shunned their prayer  grounds for the Eid prayers marking the end of 30 days fasting .

Muslim  faithful in Oyo State also stayed at home to pray as against the usual practice of congregating on prayer grounds.

I observed prayers at home because of COVID-19, says Buhari

In Abuja, the President, Major General Muhammadu Buhari (retd.), said on Sunday that he observed the Eid-el-Fitr prayers at his State House residence because of the raging COVID-19 pandemic.

He explained that his decision was in compliance with the measures put in place by the PTF which prohibited mass gatherings.

Buhari was joined at the prayers by family members, including his wife, Aisha, and son, Yusuf.

In a brief interview after the session, Buhari urged Muslims to reflect on the lessons of the period.

He said  “I held Eid prayers at home today with my family, in keeping with the protocol of the Presidential Task Force on Covid-19 against mass gatherings, as well as the directive of the Sultan of Sokoto and President General of the Jama’atu Nasril Islam (JNI), Alhaji Sa’ad Abubakar III, suspending Eid congregational prayers across the country.”

The President, after the Eid prayer, called on farmers to double their efforts in producing more food for the country by taking advantage of the rainy season.

He stated “I hope the rainy season would be bountiful, so that we get a lot of food.

“I wish the farmers will go to farms and save the lives so that we can produce what we need in sufficient quantity so that we don’t have to import food.

“In any case, we don’t have any money to import food. So we must produce what we are going to eat.”

Buhari noted that COVID-19 was so devastating that it had reduced developing and developed countries to be on the same level.

He stated,  “Nigerians can see that COVID-19 has reduced us, both the developing and developed countries, to the same level. In fact, we have fewer casualties than they we have.”

Muslims in the central part of  the Federal Capital Territory   prayed at home as they completed the mandatory one-month Ramadan fast.

In  obedience to the PTF and the Sultan’s  directive, The PUNCH observed that all prayer grounds in the FCT were under lock on Sunday.

No congregational prayers were also held in mosques visited by our correspondents.

Some open spaces usually converted to praying grounds in Asokoro, Maitama, Wuse II, and Jabi among others were also deserted.

It was noticed that fun spots where faithful always celebrated such festivals were closed for business on Sunday.

During a visit to the popular Millennium Park located close to the Unity Fountain in Maitama, one of our correspondents sighted only guards who left the main gate partially closed.

But  the FCT inhabitants living close to Nasarawa State, stormed prayer grounds in the North-Central state to perform their Eid prayers.

One of our correspondents observed that many Muslims left their homes  in Karu and other areas which share boundaries with Nasarawa State early in the morning with their prayer mats for the religious exercise.

The majority of the worshippers sighted at Nyanya and Karu were without face masks and also ignored social distancing.

Some of them, who spoke to one of  our correspondents, said they decided to leave Abuja for Nasarawa because the  FCT administration had not relaxed the current lockdown to allow congregational worship.

Family jubilates as son who went missing at...

EU authorizes use of Remdesivir to treat Coronavirus

Aides of VIPs to be barred from airports