A Nigerian man broke down in tears as he narrated all he’s allegedly been through in the hands of NCDC officials since arriving Nigeria.

Ndubuisi Ekwulonu said he left Sweden on September 9 and came into Nigeria on 10. Now that he’s trying to leave the country back to Sweden to resume his job, he said NCDC officials are frustrating him.

He explained that at the airport, FG informed them they’ll have to fill a form upon arrival for Covid-19 test. He chose the option to pay on arrival. When he arrived at Nnamdi Azikiwe airport in Abuja, he paid with his bank card and was debited N42, 750.

He explained that he was given two lab options to carry out the Covid-19 test. He went to the address closest to him only to discover that it’s a plaza in Abuja, not a lab. He went to different places before finding the lab.

To carry out the test, they had to receive confirmation of his payment, he explained. He said he waited the whole day and the next for his name to show up that he has paid so he can do the Covid-19 test. However, his name never came up. Two people on the same flight with him couldn’t find their names either.

He said NCDC officials asked that he pays another N42,759 for the test which he paid and the test was done.

He stated that if he doesn’t do the test, he’ll be banned from leaving Nigeria and he needs to leave to start work on Monday.

He said he is supposed to leave Nigeria on Saturday against his Monday resumption but he received another message before then stating he has to do another test again and pay a third time to get his Covid-19 result.

“We’re like two hundred and something passengers on that flight and everybody paid this money,” he lamented after paying multiple times for Covid-19 tests without seeing his result.

Crying, the man vowed not to return to Nigeria if he leaves because of how Nigerians are treated in their own country.

“The stress is too much. The stress I’ve passed through since one week I’m in Nigeria. You can’t imagine it. It’s not good.

“We have a bad name abroad, if you’re coming to your country, you’ll still face a bad name. It’s not good. Still the test, they can’t upload it on their system. And if I’m leaving on Saturday and I didn’t show on the system, they’ll ban me from leaving Nigeria.”

He continued crying as he explained that he is at risk of losing his job if he doesn’t leave the country on time.

He said his job was hard getting  and NCDC officials are trying to make him lose it by refusing to release his Covid-19 test result.

“How can I lose my job just because I came into Nigeria. My problem is not about the money. My problem is when I’m leaving Nigeria, they might ban me not to leave.”

Other Nigerians also poured out their heart as they narrated their experience in the country.

He wrote: “We note challenges faced by Nigerian in video- a result of miscommunication btwn him & a private lab Govt & private agencies are working hard to make system work to prevent spike in #COVID19 cases in [Nigeria]

“1M people dead 95% of people have traveled w/o hitches We #keeppushing.” 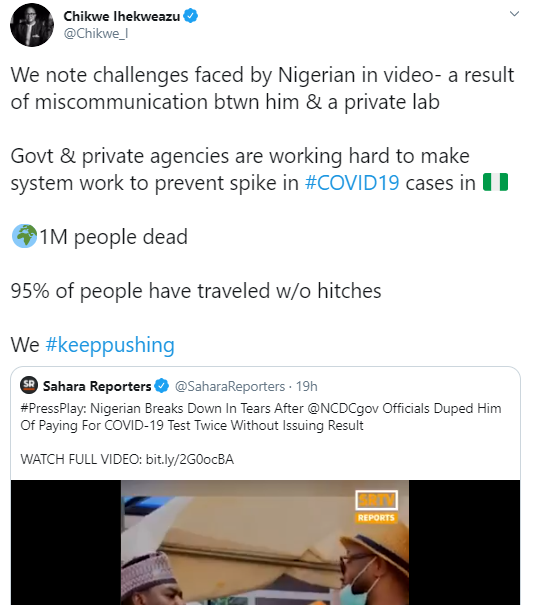 Nigerians were unimpressed with Ihekweazu’s “vague” reply and they called him out for not addressing the issue properly. 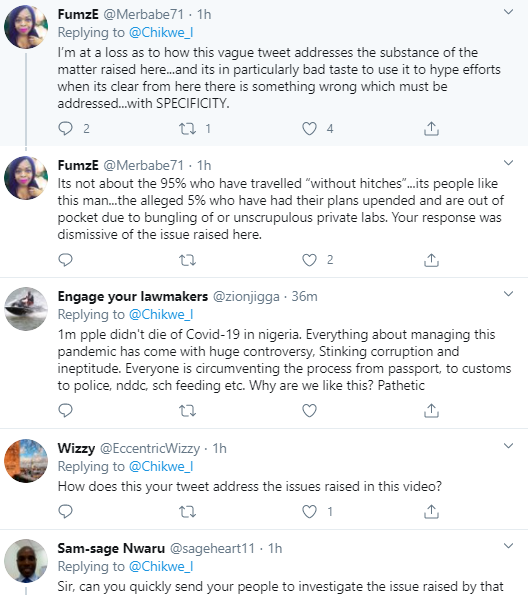 Below is a video of the Nigerian man narrating his plight.

I am not Fela, leave me out of your schemes – Burna Boy fires back at Omoyele Sowore after being invited to #RevolutionNow protest