Musician Folarin Falana (Falz) and skit maker, Debo Adebayo (Mr. Marcaroni) have rejected the invitation of Lagos Governor Babajide Sanwo-Olu to a peace walk for “the healing of Lagos”.

The state governor during a press conference this afternoon said as part of moves to heal the state following the October 20, 2020, Lekki tollgate shooting, a peace walk which he would participate in would be organized and he invited the likes of Folarin Falana (Falz), Debo Adebayo (Mr. Marcaroni), Dele Farotimi, Temitope Majekodunmi, Segun Awosanya (Segalink), Adedotun (Just Detoun), Seun Kuti, Commissioner of Police, Hakeem Odumosu and Commander of Rapid Response Squad (RRS), CSP Yinka Egbeyemi and others to join him in the “historic march for our dear Lagos.”

Reacting to the invitation, Mr. Marcaroni said genuine peacemaking should begin by first implementing the recommendations of the panel. Falz, on his part, described the ‘walk of peace’ as a joke and a very disrespectful one at that.

“I humbly decline the invitation of Mr Governor. The Government themselves set up a panel. The panel has made recommendations.

I believe that genuine peacemaking will begin by first implementing the recommendations of the panel. Then we can begin to trust the government.

Mr Governor has said it in his speech that to be a Centre of Excellence, we have to be a Center of Truth. Before there can be healing, the government has to be sincere. There must be acceptance of wrongdoings and willingness to correct them.

The last walk wey I do, na so dem bundle me, strip me naked, brutalize and dehumanize me. I no carry gun, I no carry weapon. As dem dey beat me, dem dey ask why I dey disturb Mr Governor. Now dem say make I come do walk. For another round of beating??

Abeg o. If I wan lose weight, I go go gym. Same peaceful Walk wey Nigerian Youths do wey dem kill them? Some are still in prison.. Some have gone into hiding. Their lives no longer theirs all because we decided to walk against police brutality.”Mr Macaroni wrote

Falz on his part tweeted;

“This suggestion of a ‘walk of peace’ sounds like a joke and a very disrespectful one at that. People were murdered in cold blood and absolutely no iota of justice has been served more than a year after. How can there be peace without justice?

In this same speech, you said ‘To be a smart city, we first must be a just one. Remember the young Nigerians that had their lives snatched away by weapons wielded by our own Armed Forces? You want to sweep that under the carpet? Is that how to establish a just city? #ENDSARS

Young Nigerians, till today, are still being constantly harassed and extorted by police officers!! You were awfully quiet about that. Or are you not aware? #ENDSARS.” 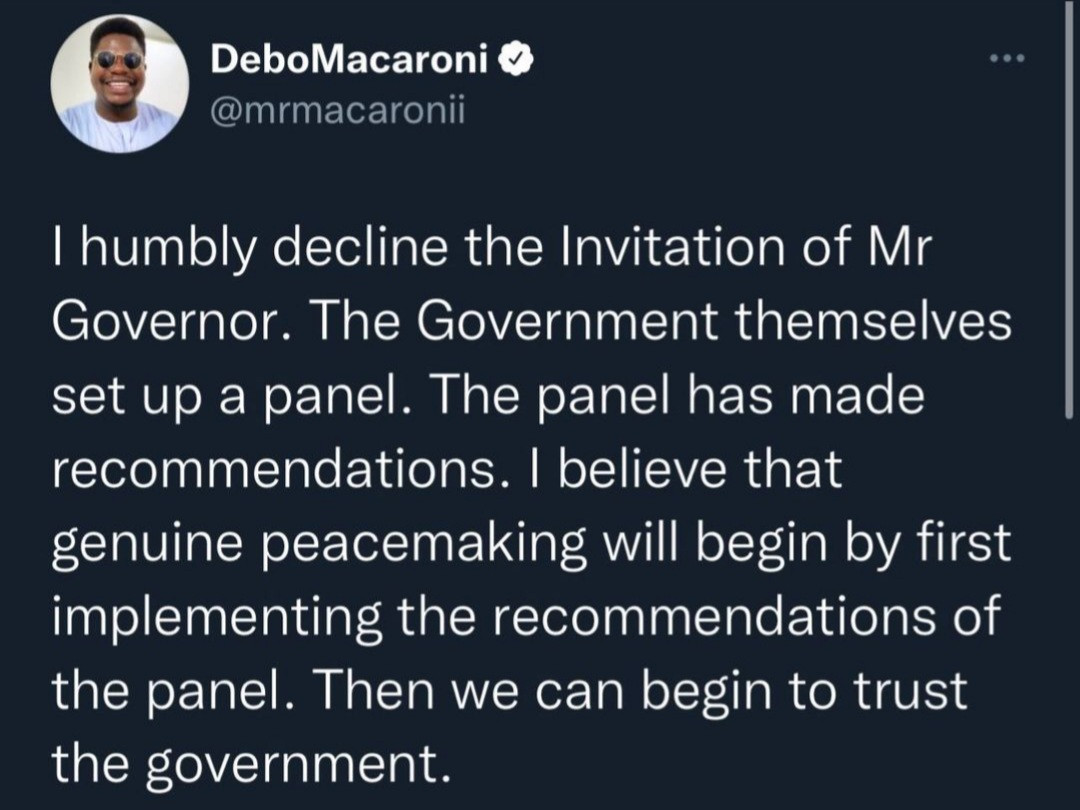 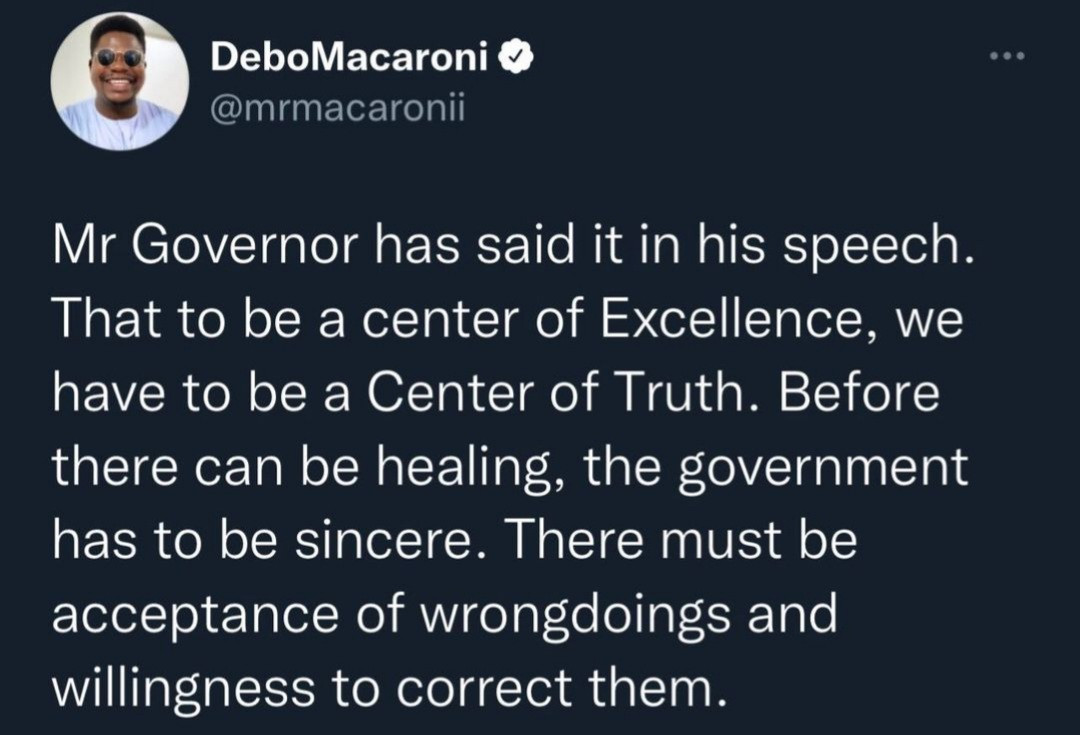 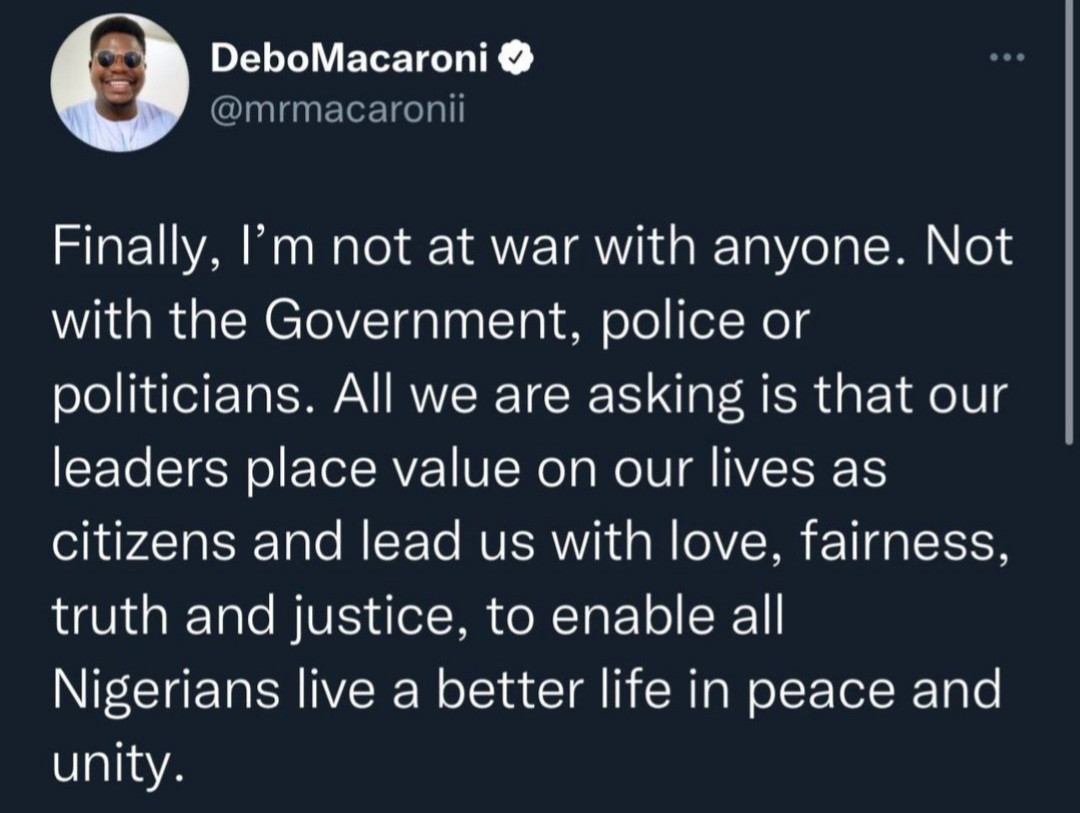 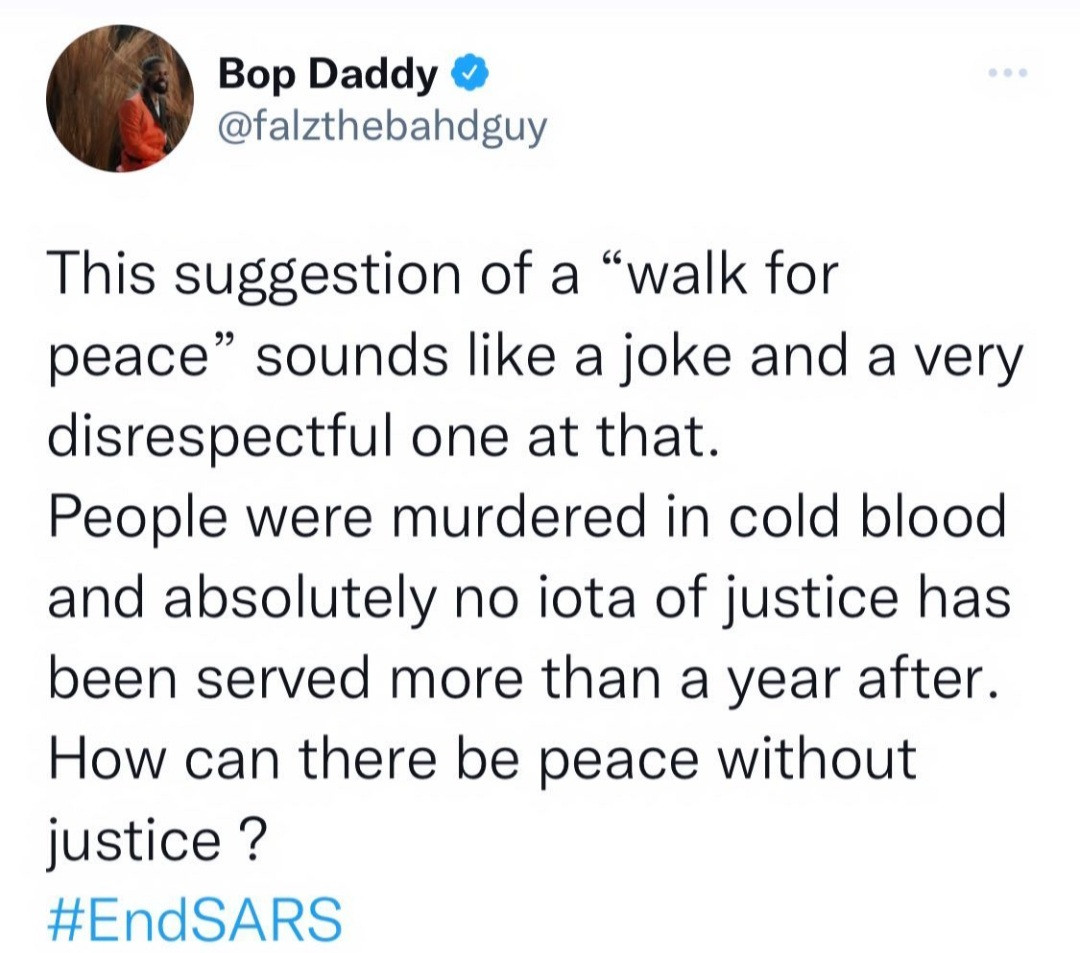 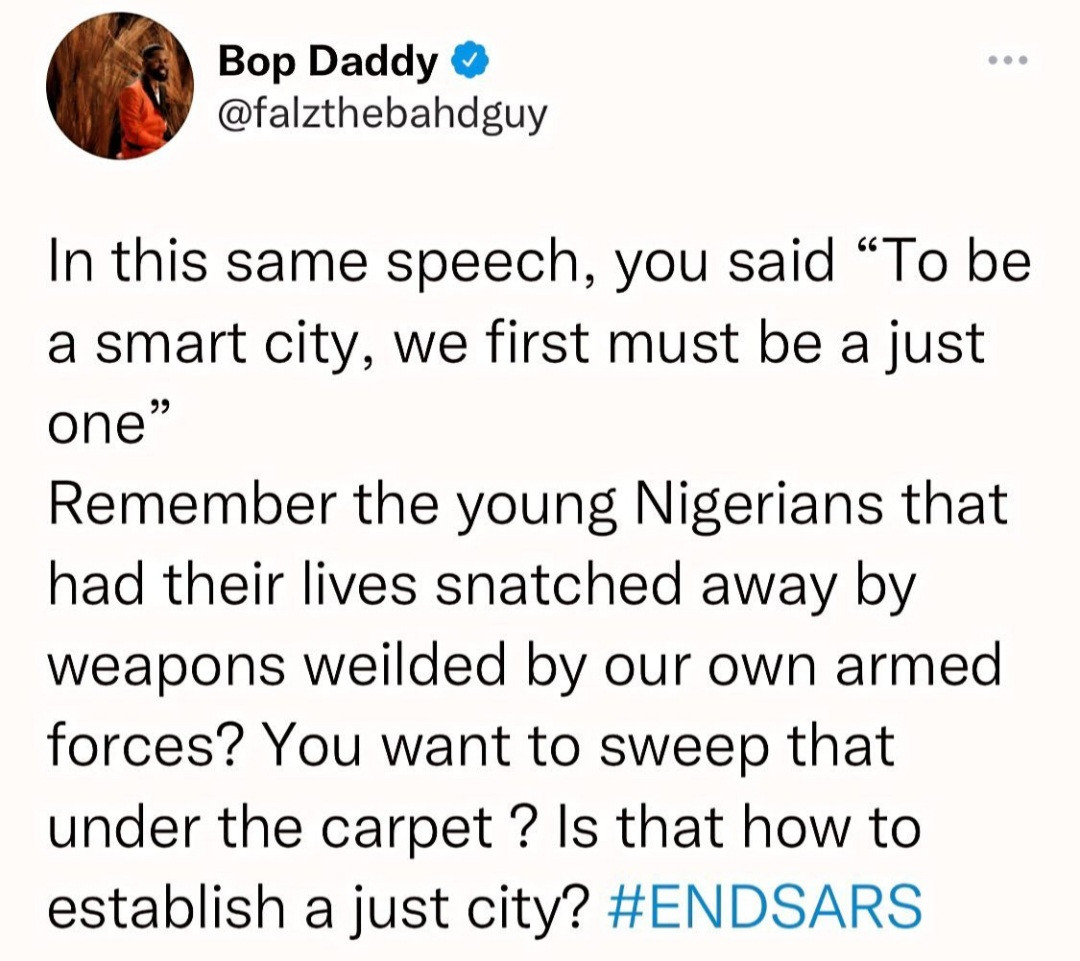 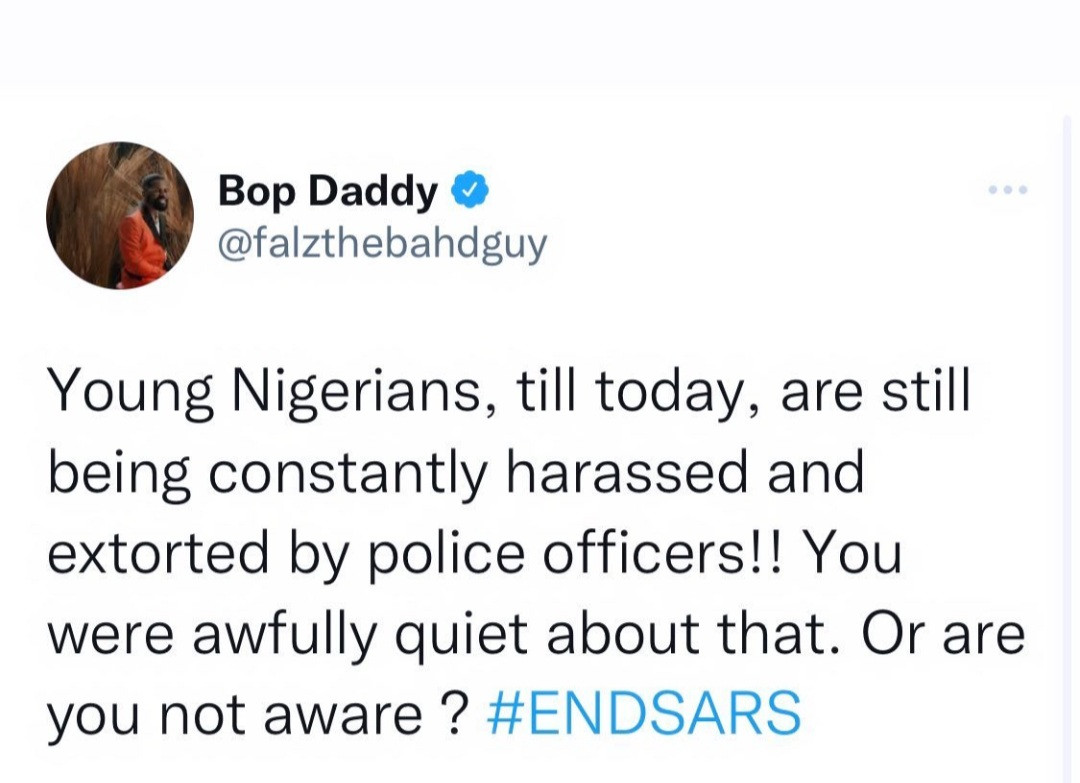 Two ex-Police officers and five others arrested for...