I am an innocent man being persecuted by some very bad, conflicted & corrupt people – Donald Trump

US President, Donald Trump has once again reacted to the on-going trial of his former lawyer, Micheal Cohen.

According to him, its been two years of presidential harassment with no result, ‘after more than two years of Presidential Harassment, the only things that have been proven is that Democrats and other broke the law. The hostile Cohen testimony, given by a liar to reduce his prison time, proved no Collusion’.

Trumo added that, ‘his just written book manuscript showed what he said was a total lie, but Fake Media won’t show it. I am an innocent man being persecuted by some very bad, conflicted & corrupt people in a Witch Hunt that is illegal & should never have been allowed to start – And only because I won the Election’. 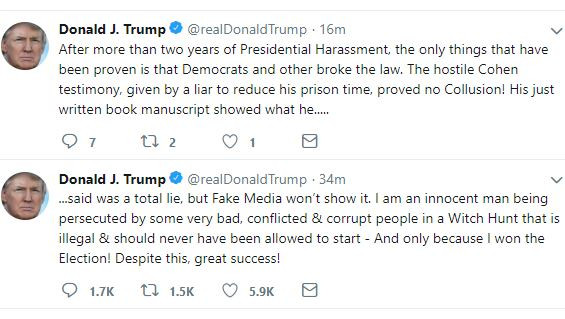