Breaking News
‘Jose Peseiro could be another Clemens Westerhof’ –...
Kano explosion: “May your days be longer and...
1,627 terrorists surrender in three weeks as soldiers...
El-Rufai seeks wiping out of communities on Kaduna-Abuja...
Man trafficks wife for prostitution, sells son for...
7,256 Nigerian nurses left for UK in one...
Lagos airport shut temporarily, flights diverted over mangled...
UK police will not take further action against...
Pressure on APC governors over tickets for Senators,...
Presidential primaries: Uncertainty over APC, PDP delegates’ lists...
Home News Greek passenger narrates how he escaped death in the Ethiopian Airlines crash
News

A Greek passenger has hold of how he was saved from being one of the casualties in the Ethiopian plane crash.

The Nairobi-bound Boeing 737 crashed just minutes after an early-morning takeoff from Addis Ababa on Sunday. All on board – 149 passengers and 8 crew members – died in the crash.

Antonis Mavropoulos, a Greek man, was supposed to be the 150th passenger but he arrived two minutes late for the flight. 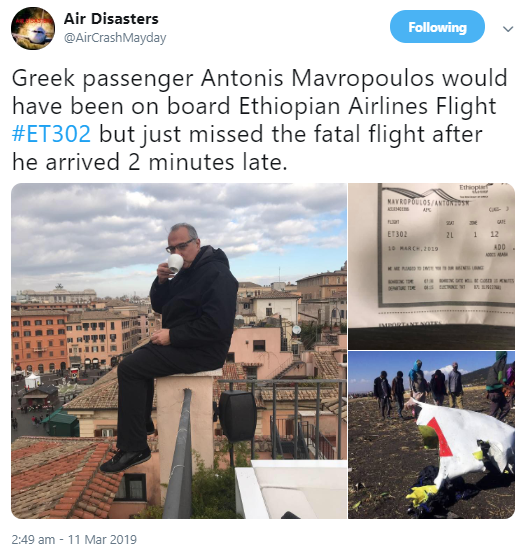 Mavropoulos, president of the International Solid Waste Association, a non-profit organisation, was travelling to Nairobi to attend the annual assembly of the UN Environment Programme, according to Athens News Agency. He was supposed to board the plane but he reached the departure gate just two minutes after it was closed.

I was mad because nobody helped me to reach the gate on time. 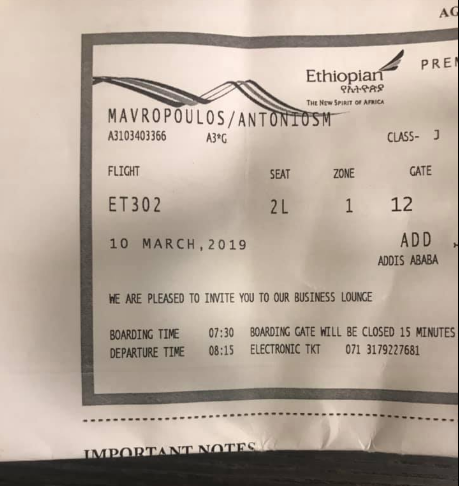 He booked a later flight but was then prevented from boarding by airport staff.

They led me to the police station of the airport. The officer told me not to protest but to pray to God because I was the only passenger that didn’t board the ET 302 flight that was lost.

The airport authorities explained that they wanted to question him because he was the only passenger booked onto the doomed flight who wasn’t on board.

They said they couldn’t let me go before cross-checking my identity, the reason I hadn’t boarded the plane etc.

Kano explosion: “May your days be longer and...