Chris-Vincent Agyapong, a Ghanaian journalist and popular atheist, has given reasons why God didn’t stop the Ethiopia Airlines crash despite children and probably Christians being on the plane.

Taking to Facebook, Chris used the opportunity to further argue tha t”there is no God,” which is why he didn’t intervene. He added that if there is indeed a God, then “he is powerless or asleep.”

Is it not sad and mysterious that none of the 157 people who died in the plane crash yesterday was worth saving by any of the Gods believed to be up there?

I mean, so none of the 157 people which probably included children and infants was really a decent person that called on his or her God and the God answered?

There are a few possible reasons why none was saved:

1. God was sleeping
2. God was busy drinking beer with Satan
3. God couldn’t be bothered as he does not care about homo sapiens
4. God caused this evil to happen himself
5. God is powerless and couldn’t do anything
6. God has been dead a long time ago but no one came to tell us
7. There is no God

Considering the odds and how repetitively such things happen without any sign of a miracle working God showing up, the most plausible answer is that none of the Gods claimed, really exist.

The God delusion has been part of us for a long time and these things always remind us that indeed no celestial father is watching over us.

Do you remember Captain Planet? He mostly shown up when his people called him to save them or the world but the many Gods people believe in, keep failing them and yet they can’t see it.

It’s sad but I believe many shouted and called on God—he didn’t answer or turn up to save any.

We are here by random act of chance and not by the hands of any invisible father.

The earlier we begin to work hard to understand the world we live in and find solutions to our problems, the better.

Do not rely on the hand of any God, none exist. 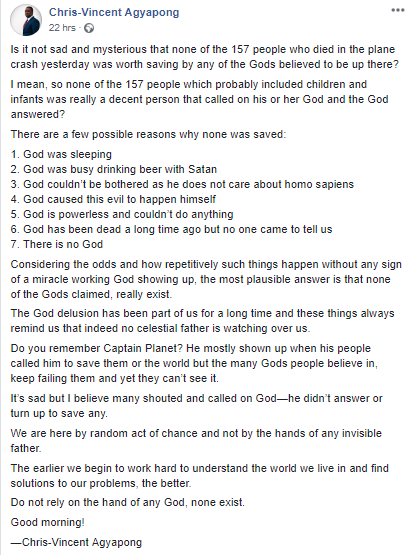 Conclude on the side of democracy, Atiku warns as INEC stalls five Gov elections