A young lady has gone missing after travelling to Abeokuta to meet a guy she met online. To make matters worse, the man she claims she was going to visit has denied knowledge of her or her whereabouts.

The lady, named Debby, told her friends that she was going to visit a man named Ayo. She gave them his name and phone number and informed them that she met him online. She asked that if they do not hear from her, they should contact him.

The woman has not been heard from since she left for the man’s house and her friends have contacted Ayo as she instructed. But Ayo has denied knowledge of the woman and proceeded to block all the woman’s friends.

So my roommate traveled to abeokuta to meet a guy she met online
They have been talking for a while and he invited her over to his place
She went yesterday
When she was going she told me
Even when she got there she told me On chat and promised to call later
Till now her number is switched off.
I tried calling the guy’s number she gave me
I called a few times he ended it and switched off his phone
I messaged him at first he read and didn’t reply
I had to send his number to Oda of my friends he blocked some of them and replied some saying he does not know anybody by that name
And that he doesn’t live in abeokuta he lives in ibadan.
He started saying rubbish.
I will send the screenshot of the conversation I had with my friend and d voicenotes the guy sent to me.

Her name is Debby
She is a party starter too
She works at 38 too
The guy’s name is Ayo
That was what she told me and that was what the guy told her
Pls guys help me post on other groups incase anybody knows him
I have been on this issue since yesterday
It’s over 24hrs now and my friend is nowhere to be found. Pls help me post till the picture goes viral ?????? 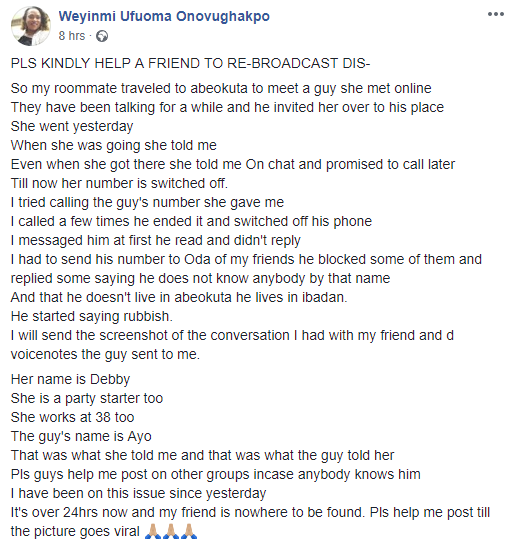 Waje Quitting Music: A move of worry and wake up call to the Industry – Adeyinka Oluwamayowa