The Independent National Electoral Commission (INEC) has released a schedule of activities for the completion of the outstanding election in Rivers State.

The electoral body stated that the process for the election earlier suspended on March 10, 2019, will resume with a stakeholder meeting on March 30.

According to INEC in a release signed by the Head of Department, Voter Education, and Publicity, Edwin Enabor, resumption of collation and announcement will hold between April 2 and 5.

Supplementary elections will be conducted where necessary on April 13, results will be announced between April 13 and 15 while Certificates of Return will be issued on April 19. The body appealed to all Rivers residents to embrace the resumed electoral activities as the 2019 general elections come to a close. 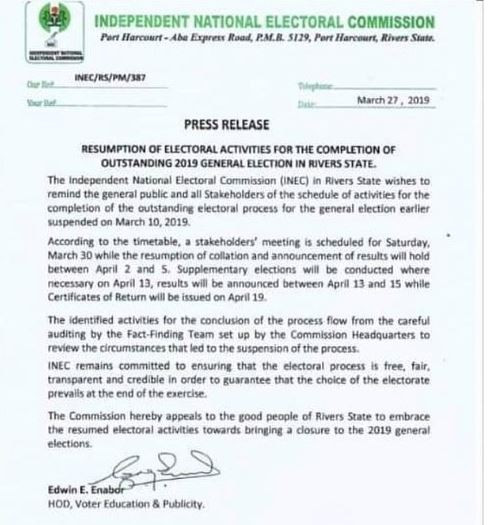