The deal which was unveiled today (Wednesday) during Embraer Business Meeting with the Aviation World in Port Louis, Mauritius, makes Air Peace the first to order the brand of jets in the whole of Africa, thereby becoming the official launch customer of the brand of aircraft in Africa.

The order comprises purchase rights for a further 20 E195-E2 jets. The aircraft is a 124 seater jet in dual class and 146-seater jet in single class configurations respectively.
With all purchase rights exercised, the contract has a value of US$2.12 billion based on current list prices.

The carrier also set a regional record in September 2018 when it ordered 10 brand new aircraft from Boeing, increasing its fleet size then to about 37 aircraft. With the new order, Air Peace’s fleet size has increased to 67 aircraft.

Shortly before the firm order for 10 brand new aircraft from Boeing, Air Peace set a domestic record as the first Nigerian airline to acquire and register the Boeing 777 aircraft in the country. Three of the four wide-body aircraft it acquired for its long-haul operations to Dubai, Sharjah, Johannesburg, London, Houston, Guangzhou and Mumbai have so far been delivered. 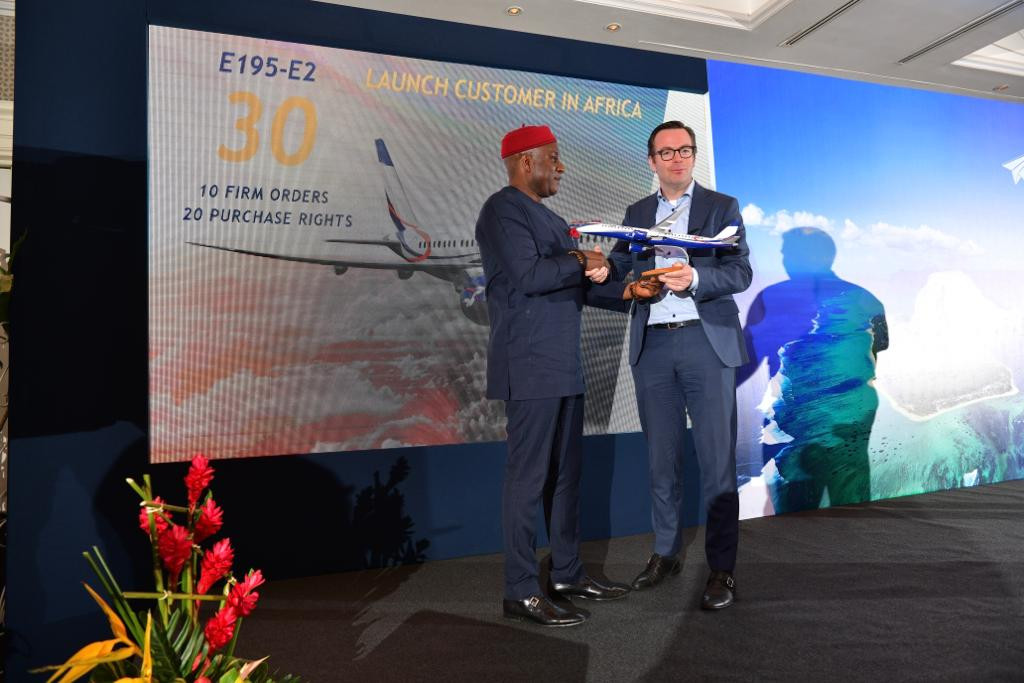 Speaking on the latest order in faraway Port Louis, Air Peace Chairman/Chief Executive Officer, Mr. Allen Onyema said: “Embraer’s new E195-E2 presents us with a marvel of economic performance. It’s also great that we will be the first E2 operator on the African continent. We already have the ERJ145s in our fleet, so we understand the high standards of Embraer products.”

The E195-E2 aircraft, he said, would strengthen Air Peace’s drive to deploy the right kinds of aircraft to underserved and unserved domestic and regional routes under its no-city-left-behind project. 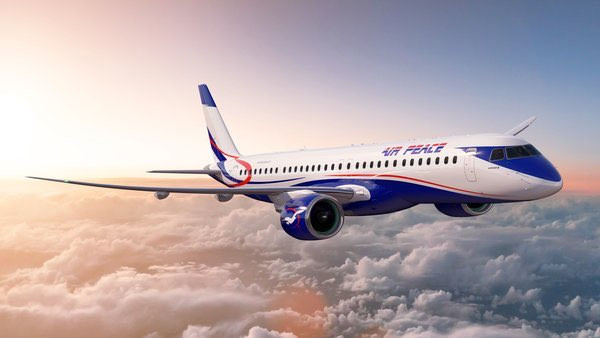 Livery of the 30 brand new Embraer 195-E2 aircraft ordered by Air Peace unveiled during the contract signing ceremony at Embraer Business Meeting with the Aviation World in Port Louis, Mauritius on Wednesday.

Onyema thanked President Muhammadu Buhari for creating an enabling environment for the growth of aviation in Nigeria through waving customs duties on commercial aircraft, engines and spares as well as granting value-added tax (VAT) waiver.

“Without these noble gestures from my President (Muhammadu Buhari),” he said, “Air Peace would not have been able to achieve this growth. Thank you very much, Mr. President”.
For his part, Vice President, Sales Africa, Embraer Commercial Aviation, Mr. Raul Villaron said: “Air Peace embodies the kind of pioneering spirit Embraer loves. The airline was established to bring highly skilled work opportunities to the people of Nigeria, boosting connectivity, and therefore the economy, in the region. Air Peace has delivered on both aims, while at the same time developing a fast-growing successful airline. It’s great to have them on board.”