Kingsley Moughalu, a former deputy governor of the Central Bank of Nigeria (CBN) has faulted President Buhari’s directive on non-provision of foreign exchange for food importation.

Recall LIB reported that President Buhari while hosting APC Governors at his hometown in Daura, said his directive to the CBN to starve food importation of foreign exchange stemmed from the steady improvement in agricultural production and attainment of full food security.

However the former Presidential candidate of the Young Progressives Party (YPP) rubbished President Buhari’s order and further pointed out that the CBN is an independent body which should be left alone to discharge its functions. Moughlau stated that the political interference in CBN’s economic policies leads to poverty and also weakens institutions.

“Is @cenbank now a ministry to be “directed” by President @MBuhari ? Article 1(3) of the CBN Act 2007 states ‘In order to facilitate the achievement of its mandate under this Act…the Bank shall be an independent body in the discharge of its functions.

“The issue here isn’t whether or not CBN should allow access to forex for food imports. It is about whether such an economic policy of a central bank should be imposed by a political authority. A major reason for our poverty, instability and weak economy is weak institutions.

“Our marketplace should be regulated and guided in a rational manner that creates a level playing field. Our economy will not be saved by Ad Hoc political decisions like this, handed down by the very institutions that should be shielded from the whim and caprice of politicians.

“Nigeria’s entire economy appears to have been sub-contracted to our central bank, including industrial and trade policy. In the process the economy has fared poorly and the Bank has lost its independence. This is sad!

“@NGRPresident should leave @cenbank alone to discharge its mandate independently within the ambit of the CBN Act, and stop “directing” it. @cenbank should on its part assertive its independence (assuming it actually believes it should be independent, but the Act says so, clearly!” 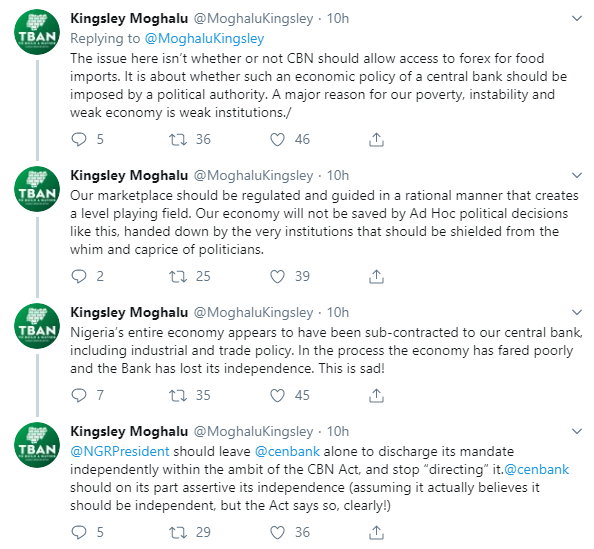