Nigeria not broke, not defaulting in debt repayment’ •We are trying to reduce poverty, say states

FOR the second day running, governors were under fire yesterday.

The amount was different from the various intervention funds from the Central Bank of Nigeria (CBN) for the Anchor Borrowers Programme (ABP) and the Micro, Small and Medium Enterprises (MSMEs), among others.

Besides the N5.03 trillion, Mrs. Ahmed said the Federal Government also released to the states $3.4 billion during the period under review.

The minister, who spoke at the sixth edition of the presentation of President Muhammadu Buhari’s administration scorecard (2015-2023) in Abuja, said the country was not broke despite financial difficulties.

She said the funds were released as 13 per cent derivation for oil-producing states, ecological funds, refunds for construction of federal roads, support for stabilisation and COVID-19 interventions. 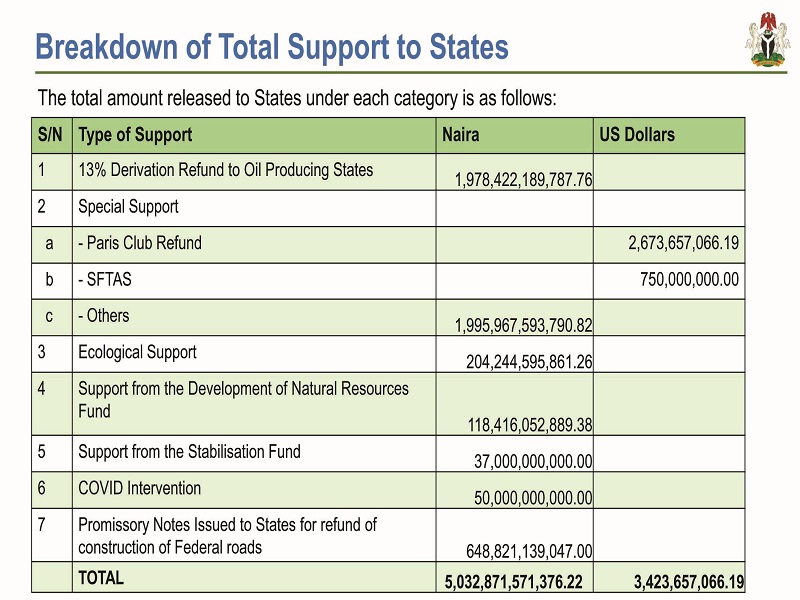 The minister said: “With respect to sub-national governments, the FMFBNP (Federal Ministry of Finance, Budget and National Planning) goes over and above its statutory role to provide financial support for states.

“A total of N5.03 trillion plus an additional US$3.4 billion has been released to the states by the Federal Government over the life of this administration.

“Each of these payments has distinct repayment terms with some given as grants and others as loans with favourable repayment terms, including a long amortisation period.

“The support covers the 13 per cent derivation refund to oil-producing states, refund for construction of federal  roads, ecological support and support from the stabilisation fund, COVID intervention, among others.”

According to the minister, her ministry plans to disclose the details of its state-by-state release of the 13 per cent derivation refund.

She noted that since the fund is from the federation account, it is always taking a toll on what is available for distribution to the three tiers of government.

Mrs. Ahmed said: “On 13 per cent derivation, there are details that will be provided on state-by-state releases. These releases are not just starting now.

“In my report, you saw that it occurred in several periods. But for the recent one, we negotiated to disburse it over 60 months period and we just started that about two months ago.

“So, basically the governor was not sharing the recent one. But there are some that have been disbursed and concluded. There is a plan that it is supposed to be disbursed over a 60-month period.

“We took the pain to negotiate 60 months because of the tariff fiscal rate. So, the disbursement is from the savings of the federation account.

“If we give out from the savings, it is affecting what is available for distribution to all tiers of government.”

The minister listed the benefiting states to include Kaduna, Gombe, Taraba, Kano, Katsina, Nasarawa, Ebonyi and Cross River, as well as the Federal Capital Territory (FCT).

His revelation culminated in the condemnation of others that kept sealed lips on the receipt of such funds, which Wike explained, helped his administration in the implementation of many landmark projects.

Following the disclosure, some of his colleagues in the Niger Delta have explained how they applied what accrued to them.

On the issue of the financial viability of the country, the minister noted that contrary to insinuations in some quarters, Nigeria is not broke.

Buttressing the state of buoyancy, the minister insisted that the country continues to generate revenues, which are shared at the Federation Accounts Allocation Committee (FAAC) meetings monthly to the three tiers of government.

The minister recalled that the Nigerian National Petroleum Company Limited (NNPCL) recorded increase in oil production that soared to 1.3 million barrels per day in October.

She added that the rise in oil production has contributed more revenue to the government’s coffer.

Mrs. Ahmed said: “Nigeria is not broke. We continue to generate revenue on a monthly basis and these revenues are distributed at FAAC.

“Again, to continue with the tradition of transparency, we actually disclosed how much is distributed on a monthly basis to the various tiers of government.

“Again, in my presentation, I said we have witnessed a significant increase in non-oil revenue.

‘While oil revenue is underperforming because of criminality, recently NNPC has reported that it has been curtailed and we are already beginning to see the pickup in the production volumes which is that more revenue has begun to come to the federation.”

She, however, noted that despite the increased revenue, there is still a deficit in relation to government expenditure.

On debt, Mrs. Ahmed said the government has no plans to opt for debt relief or restructuring because the country’s debt is still sustainable at 33 per cent of Gross Domestic Product (GDP).

The debts, which the minister said the Federal Government was monitoring closely, remain the lowest among the countries in Nigeria’s category, according to the minister.

She said: “Our borrowings have been practical. They are sustainable. They are guided by debt management strategies.

“The debt management is being followed religiously. Our debt is sustainable: 33 per cent of GDP. We are still the lowest with countries that plate our comparatives.”

The minister dismissed suggestions that Nigeria should restructure its debt.

Mrs. Ahmed boasted that the country is still on a sound footing, adding that it has not defaulted in its repayment of domestic and foreign loans.

She said: “We don’t have to restructure because we have a debt strategy that could be followed closely. We provide in our budget provision for debt service. It is taken as a first-line charge so we have not defaulted on any loan external or local.

“And we have projections in reaching out loans in the short and medium terms. This is the medium plan and very frequently it is revised.

In the bid to boost the economy, she said the government has incentivised small and medium-scale businesses by pruning their taxes.

Mrs. Ahmed said from the implementation of the 2022 budget, the Federal Government has released N1.7 trillion for capital projects as of September.

Minister of Information and Culture, Alhaji Lai Mohammed, recalled that the scorecard presentation was launched in October to showcase the numerous achievements of the Buhari administration.

He said: “No administration, since the beginning of the current political dispensation in 1999, has done more than the Buhari administration in supporting states with all sorts of financial interventions.”

The minister recalled how at least 27 states were struggling to pay salaries when the administration came on board in 2015.

Mohammed wondered what would have happened if the President had not offered a helping hand to the states without discrimination.

He said: “But for Mr. President, most of the states would have been plunged into serious socio-economic crisis, with dire consequences for the country.

“The support to the states came at a time when national resources had dwindled drastically, and also at a time of competing needs in many areas, including infrastructure, security, global pandemic, etc.”